I have an almost maniacal dislike of the fashion industry. It strikes me as an industry that’s wholly built on, and feeds off of, the vanity and insecurities of (mainly) women. I am tempted to say that it’s psychologically predatory but I’m afraid that would make me sound crazy, so I won’t say it. Plus, I’ve met F.I.T. students in my dating past and they always seemed kind of vapid to me.

Having said that, there’s a new public art exhibit mounted by the New York fashion industry that is simply fantastic. It’s called Sidewalk Catwalk and it runs through September 3rd. 32 giants in the industry (At least, I think they’re giants. I didn’t recognize 80% of the names.) dressed mannequins that are mounted on Broadway from 35th up to 42nd St. [It’s a portion of Broadway that’s been closed to vehicular traffic and made into a pedestrian mall, an idea that I wholly approve of.]

Here’s a photo essay of some of the more interesting ones. I can’t help wondering if they’ll survive the summer. Won’t they be destroyed by summer storms or ripped apart by screwball New Yorkers? Better see it while you can. I’ve uploaded larger-than-normal jpegs so you can click on them for a closer study.

Betsey Johnson. Of course. She’s like the crazy cat lady down the block except with a big pile of cash.

Michael Kors. I’d like to see Nursemyra poured into this one.

Nannette Lepore. Does anyone recognize that name?

This is made from a parachute, which billows out in the breeze. Clever! 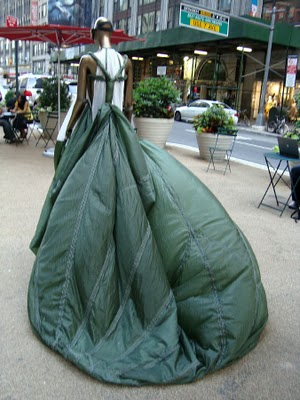 Tommy Hilfiger. For my money, the best of the bunch.

Jill Stuart. The only mannequin with “hair.”

This is by Kenneth Cole. I only included it because it’s one of the names I actually recognize. But I think the design is kind of lazy.

I believe this one was designed by Parson students. It’s better than some of the “pros.”

Won’t a lot of these be annihilated by August?