I’m feel a bit of a lazy bones this morning and I’m also inexplicably melancholy over the U.S. loss to Ghana in Saturday’s World Cup match. I didn’t think I cared all that much but it turns out I *did*! After the U.S. was ousted, I hung my hopes on England and you saw what happened there. It’s going to make for a long Monday morning. In deference to my laziness, I thought I’d toss up a few random art deco shots.

This is the interior of the Chanin Building on 42nd Street and Lexington Avenue. It’s another in a series of architectural masterpieces that seem to be around every corner out here.

This is, quite possibly, the most elegant font ever created. Bronze lettering on black Belgian marble.

This grill and reliefs are in the vestibule just before you enter the lobby. Hurried commuters rush past without giving them a second look.

This one reminds me of the cover of Ayn Rand’s Atlas Shrugged. 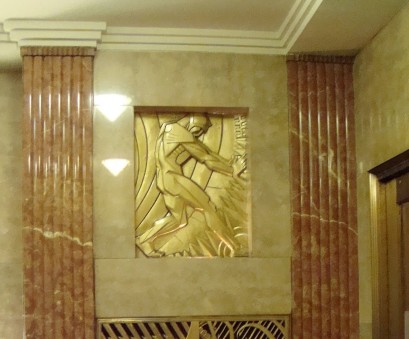 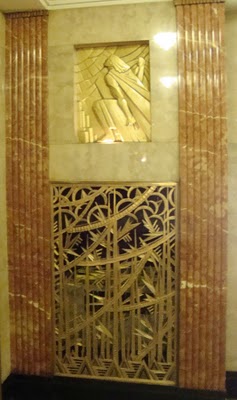 I see thunderbolts/radio waves as a reoccurring theme in many art deco buildings. I guess someone discovers what works and everyone follows suit.

There’s a bit of a heat wave in the city. There’s no heat like New York City heat. The subway system keeps the ground warm and the skyscrapers reflect the heat downward onto the streets. The filth clings to your skin. And it’s only June! I just don’t feel myself in the morning unless my underwear is sticking to my ass and I get a blast of bus fumes in my face as I try to cross 42nd St.

23 thoughts on “A little art deco in the morning”