I can’t put these off any longer. I’ll try be as succinct as possible but you know how I can get.

I’ve seen a few of Theresa Rebeck’s plays and her new comedy, Seminar, is clearly her best work. There is no thinness to the characters (which was an problem with Mauritius). Rock solid performances from everyone. That damn Alan Rickman knows how to chew up a stage. In the good way. He plays a writer of faded glory who gives private lessons to aspiring authors. He’s not a gentle instructor. Here’s his teaching philosophy in a nutshell on a poster outside the theater:

Isn’t that a great line? The play is loaded with them.

As my pal CB said afterwards, Rickman could read the phone directory in a compelling manner. There are no weak links in the supporting cast. Lily Rabe, who I saw go toe-to-toe with Al Pacino last season in Merchant of Venice, stands her ground in front of another seasoned veteran. Great direction and pacing. Can’t wait for the reviews. I’m CERTAIN the critics will agree with me [this time].

What the hell was I doing at this show? I’m not a fan of Big! Broadway! Musicals! They’re too damn cheery. I am NOT the target audience for this sort of thing. Hugh Jackman Back on Broadway is a one-man singing and dancing extravaganza. (Well…one man with a full 18-piece orchestra and six hot, hot back-up singers who have angelic voices and look to have been poured into their little black dresses.

The pre-opening hype has been fierce. The understanding around town is that the run is completely sold out and is, therefore, critic-proof. A sweet spot to be in! I was walking past the Times Square half-price ticket booth on my way home from work and, astonishingly, discount tickets were available. I got caught up in the groundswell of hype and decided to go. The lady in the ticket booth told me Jackman insisted that blocks of tickets be made available at a discount to make it affordable to a wider audience. Nice guy!

It’s as good as they say it is. I’m sure the critics are going to fall all over themselves with praise. But I probably would have enjoyed it more if I were a fan of musicals. Did I need to hear Oh, What a Beautiful Morning or songs from Carousel and The Music Man? Not so much. He played clips from his movies and made very funny self-effacing comments about them. He juxtaposed still photos of big, tough, Wolverine with big, gay, Peter Allen, who he played on Broadway a few years ago. A helluva good dancer. He worked his ass off to please the crowd and isn’t that where the rubber meets the road?

How’s this for a pedigree: Three one-acts written by Ethan Cohen, Woody Alan and Elaine May. A large cast of seasoned professionals including Julie Kavner, Marlo Thomas and Steven Guttenberg. How can it go wrong?

When it opened a few weeks ago, it received lukewarm reviews. Once again, the critics got it wrong. Lukewarm is being kind. It was one of the worst things I’ve seen in quite some time. If it were one play, I would have walked out at intermission but because it was three separate pieces, I hung in there hoping the next one would be better. The Woody Alan piece was so filled with negative Jewish stereotypes that if a Gentile had written it, Mossad would assassinate them. The Cohen play unraveled at the end and not only was Elaine May’s contribution NOT funny, it actually made me angry. She was the biggest offender. The three of them owe me a refund.

The Public Theater down in the East Village is NYC’s epicenter for Shakespearean productions. It’s been around for a long, long time. Currently on the main stage, there’s a production of King Lear starring Sam Waterson that got a bunch of mediocre reviews. The production is 3:30 long and it’s not cheap! I won’t be going to that. But I DID see a spectacular production of Love’s Labor’s Lost in the tiny, upstairs theater.

Not many props. Sparse costume budget. But there was electricity in the air, which just goes to show you that venue and marquee names count for very little. It’s all in the acting, kid. It’s one of those productions tucked into a corner that I discovered and want to share with everyone. The tickets were a measly $15 bucks! I’ve paid more and have gotten a lot less in return (see above). I think Love’s Labor’s Lost is considered one of Shakespeare’s early lightweight plays but I thought parts of it had real gravitas. [Note to Daisyfae: the Princess of France, the lead female role, was played by Renee Elise Goldsberry, who played the upscale wife in Good People. Now, THAT’S range!] 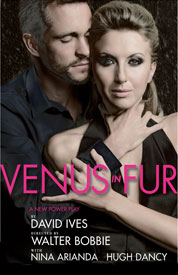 Imagine turning out an exhausting, effective performance, but having to share the stage with a firecracker just out of acting school. Such is poor Hugh’s plight. In Venus in Fur, he plays a director trying to cast a role. He shares the stage with Nina Arianda, who just recently graduated from the NYU acting program. Graduate from school and go to Broadway! That’s like a newly minted lawyer arguing a case in front of the Supreme Court.

It’s a two-hander so there’s no place for the actors to hide. I couldn’t take my eyes off of her. That she’s a Goddess dressed in black leather and lace underthings who exudes sexuality throughout much of the show certainly does not help poor Hugh. I think her seductions were directed at me specifically, even though I was in the back of the balcony. I wonder how she was able to sense my presence from so far away? Acting!