Last week I attended the annual Antiquarian Rare Book Fair at the Park Avenue armory. I saw something that, in over two decades of attendance, I had seen on only one other occasion. This:

This little pamphlet is a single poem by Charles Bukowski titled The Genius of the Crowd. It’s considered by many to be his masterpiece. I’m going post the poem in its entirety. If you’re just glancing and have limited time, read it and skip the rest. It’s pretty good stuff. Afterwords, stick around and I’ll tell you the wild history of this little book and why the dealer’s asking price is $12,000.

The Genius of the Crowd

There is enough treachery, hatred,
violence,
absurdity in the average human
being
To supply any given army on any given
day.

BEWARE THE PREACHERS
Beware The Knowers.

Beware Those Who Are
ALWAYS READING BOOKS

BEWARE Those Quick To Censure:
They Are Afraid Of What They Do
Not Know

Beware Those Who Seek Constant
Crowds; They Are Nothing
Alone.

Not Being Able To Create Art
They Will Not Understand Art

This was a cheaply-made pamphlet back 1966 by 7 Flowers Press of Cleveland. There were only 103 copies made; an extraordinarily low number. I don’t know what printing technique was used, but it looks like they may have had rubber stamps made of each text block.

The publishers were so broke that they printed it on the back of business envelopes. If you look at the top leaf, you can see the verso of the envelope where it was sealed. 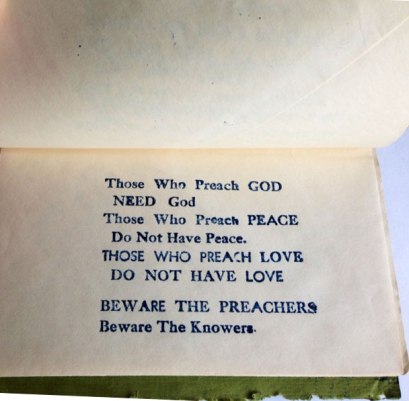 These were sold by Jim Lowell at his Asphodel Books in downtown Cleveland. In the 1960’s, Asphodel Books sold radical, left wing literature. They were rabble rousers and not popular with the local politicians. One fine day, the Cleveland Police raided the bookstore on trumped-up obscenity charges, closed it down, and confiscated all of its merchandise. It wasn’t Cleveland’s finest hour. At that point, only approximately 40 copies of The Genius of the Crowd had been sold.

Most of the surviving copies reside in University special collections. There are just a small handful in private hands. To this day, nobody has ever been able to locate the 63 copies that the Cleveland Police absconded with. Presumably, they rotted away in an evidence locker in the bowels of a Cleveland police precinct.

The poem put Bukowski on the map and the raid by the police gave it a prescience and a special gravitas. (They will attempt to destroy/anything/that differs/from their concepts) It’s important. But $12,000? Give me a break. At auction it would probably fetch a quarter of that. Still a lot of money, but rare book dealers live in a fantasy world.

Finally, here’s a recording of Bukowski reading The Genius of the Crowd with his surprisingly soft-spoken, slow, Pasadena drawl. Beautiful graphic transitions of the text in this as well.