Well, if I could do anything I wanted, I’d go here: 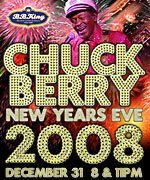 Imagine that! And B.B. King’s is on 42nd Street, just a half block from where the big ball drops. What a night! It’ll be complete pandemonium.

You might think that Chuck Berry is to too old to rock, but I saw Jerry Lee Lewis right after he had triple bypass surgery and he was fantastic. Saw Roy Orbison before he died and he was great, too. Those old geezers have been at it for such a long time that giving a high-quality performance is part of their nature. It’s the same way with the Rolling Stones.