I attended the semi-annual rare bookfair at the Lexington Avenue armory. God, what a glorious afternoon. Think of the one material thing you love the most in life. Now, imagine an armory chocked full of the very best of that one special thing.

It’s like going to the literature museum except you can buy stuff. I had expected to see some depressed prices. The economy is flat on its ass and I expected the prices for rare books to be adjusted downward accordingly but they were not. Stuff was still pretty pricey. Here’s a small sampling of the best of the best. 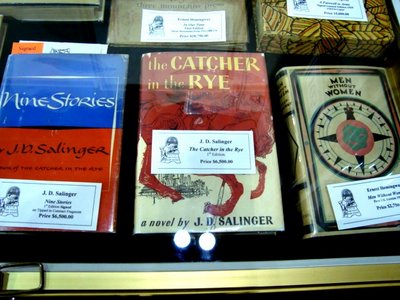 Recession? What recession? Not all books are priced so astronomically. You can easily find books for just a few hundred bucks. I didn’t buy anything. Nothing jumped off the shelf and into my arms, which sometimes happens at these bookfairs. The spring Park Avenue bookfair is the granddaddy of bookfairs. Book collectors from all over the world attend. This one is merely a warm-up. There are worse addictions. Don’t you agree?

10 thoughts on “feeding my addiction”