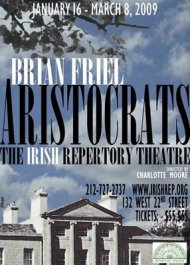 CB and I saw Brian Freil’s Aristocrats at the Irish Rep down in Chelsea. Freil is a pretty big deal Irish playwright. He had a big hit with Translations and his Dancing at Lughnasa won the Tony in 1992 for Best Play. During the Tony awards, none of the Hollywood actor-presenters knew how to pronounce “Lughnasa” and during the course of the evening there were several stuttered failed attempts. They didn’t care enough to do their homework. I’m sure the playwright was nauseated

Aristocrats was great. The Irish Rep rarely disappoints. It’s about a once-wealthy and powerful Irish family that has fallen on hard times because of the failure of subsequent generations to sustain and grow the family wealth. Just like the Kennedys! The story takes place in the family mansion which has fallen into disrepair due to neglect. I think the mansion is a metaphor for the family because all the children are broken and trying to pick up the pieces of their lives. I could be wrong because the whole metaphor thing usually sails right over my head.

This is the first play of the year for me with many more to follow. I am grateful that Mrs. Wife keeps me on a slack leash and allows these evenings of theater in the city. To live so close to something that means so much to me but never be able to indulge in it would make me sad. It’s pure luck that I live close to New York City. It’d be wasteful if I never took advantage of it.