For the Easter weekend we drove down to lovely Arlington, VA to visit my in-laws. They live just across the river from Washington D.C. I’ve never see an area so saturated with traffic jams. And I live near New York City!

I wish I had a device in my car that would vaporize aggressive drivers on the freeway. I would only use it if someone really deserved to be vaporized. Just like my cell phone jammer. When I see a car fast-approaching in my rear view mirror weaving in and out of traffic, I get some very un-Zen like thoughts running through my brain.

Saturday we took the kiddies to the Capitol building while waiting for the storm clouds to part. It’s the seat of government, you know!

We sat through a 13 minute film about the Meaning of the American Government. There was a stark contrast between the idealism portrayed in the film and the cesspool that Washington D.C. actually is. Frankly, I think the kids were bored out of their minds.

The architecture of the Capitol dome was quite nice. 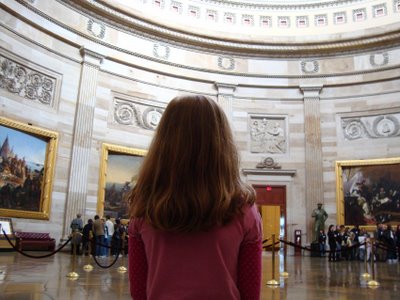 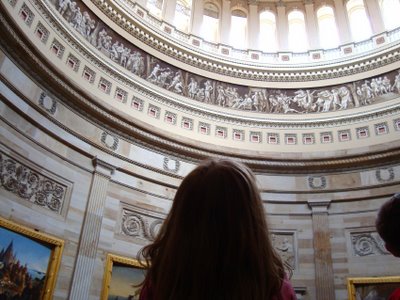 And the sun finally broke through.