Do you like loud guitars? If you do, keep your eye on your local art house cinema for a documentary called It Might Get Loud. It’s a pretty good time.

Three virtuosos, Jimmy Page (representing the 70s), The Edge (the 80s) and Jack White (90s) sit in a circle on a sound stage and talk about guitars. Their favorites. Their first. Their playing techniques, influences and secrets. It’s a master class for those who care about that sort of thing. There’s some history thrown in for perspective. Some blind Black blues players are discussed. The usual suspects.

My caveat is that this is for people who love guitars. I went with Nurse H who, when not saving lives in the hospital, sings in a Led Zep cover band. (Bustling Hedgerow. Get it?) She might have gotten more out of the film than I did.

There’s some discussion of Zep, U2 and The White Stripes/Raconteurs and some biographical stuff. [Did you know that Page started out as a studio musician for hire and played guitar on the theme from Goldfinger? I think that is so fucking cool.] It’s mainly a lot of playing sequences and slow, loving camera pans of guitars. It’s got one of the most beautiful title sequences I’ve ever seen.

It’s worth the price of admission for two scenes; watching Jimmy Page joyously play air guitar to Link Wray’s Rumble and explain why it’s such a great song. Also, White and Edge watch, with big grins on their faces, as Page spontaneously rips into the riff from Whole Lotta Love. It looks like Edge is thinking to himself, “Ho. Lee. Shit. That’s Jimmy Fucking Page playing Whole Lotta Love three feet in front of me. How lucky am I?”

At the end, the three of them sit and play an acoustic version of The Weight. It’s a soft touch. 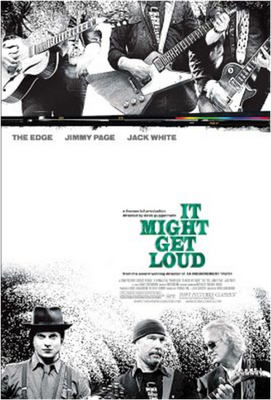