I watched the big Macy’s Thanksgiving Day parade with the two daughters yesterday morning. I’ve been watching that parade since I was a kid. 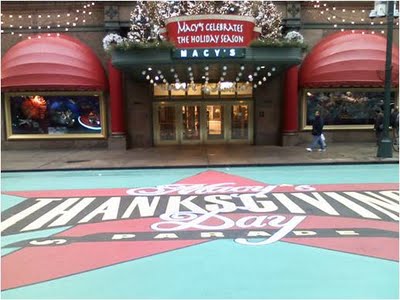 Photo taken early morning the day before the parade.

I went to the parade many years ago. Like being in Times Square on New Year’s Eve, it’s something you have to do once in a lifetime. But, take my word for it, once is enough for both. My friend was carrying a brown paper bag that was making a lot of curious clinking sounds. He worked for British Air and inside the bag were small bottles of Harveys Bristol Cream sherry that he had liberated from a flight. I felt guilty drinking in front of all those families and little kids but it was windy and freezing out so I had no choice.

I remember seeing Sammy Davis Jr. on a float wearing a thick white fur coat and waving two bejeweled hands to the crowd. A gust of wind blew the Superman balloon against a streetlamp. His arm tore open and deflated. While his left arm was stretched out in front of him, fingers pointing up, up and away, his right arm fluttered behind him like a limp weeny.

Today’s the Macy’s day parade
the night of the living dead is on its way
with a credit report for duty call.

8-Year Old Daughter brought “Squanto, Friend to the Pilgrims” home from school. It’s the story of how Squanto, a Native American from the Wampanoag nation, taught the newly arrived Pilgrims about agriculture, hunting and basic survival skills. The first Thanksgiving took place in 1621 between the Pilgrims and 90 members of the Wampanoag tribe.

I’ll bet if ole’ Squanto had known that future generations of these European interlopers would decimate the Native American population with an insane scorch and burn land grab, he’d have dropped a few toxic mushroom caps into their salad course.