[Actually, what ends up happening is that I’ll buy a book if I think it’s under priced with the intention of flipping it to a legitimate rare book dealer but once I get the book in my hands, I can rarely part with it. I could never make a living this way.]

On Monday, February 8th at Pacific Book Auctions in San Francisco, you can pick up a second folio edition of William Shakespeare’s Works. 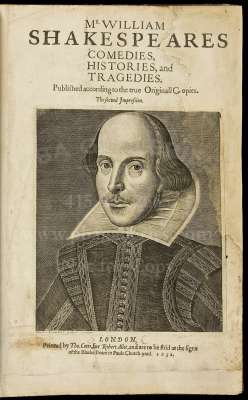 This truly is a landmark of literature. The first folio of these plays was published back in 1623 and tonight, in New York City, there is one major and two minor Shakespeare productions being performed. That’s what I call real staying power. You also have to take into consideration all the works that have been influenced by The Bard. Disney’s The Lion King? Hamlet. West Side Story? Romeo and Juliet. Etc., etc.

This second folio is a page-for-page reprint of the first folio, which is considered the only reliable text for many of Shakespeare’s plays. It’s one of the most valuable books ever printed. If you think a second folio will set you back (see post title for auction estimate), consider that a first folio sold at Sotheby’s in July of 2006 for £2.5 million. Ouch.