I haven’t done a theater post in quite a while. It’s not because I’ve stopped attending. Far from it. We’re in the heat of the spring season and I think I’ve got about five under my belt that I’ve not written about and I’m seeing two more this week. I got the notion in my head that, frankly, the theater posts aren’t that interesting to most people. And that’s fine. I get that.

Where it all goes horribly wrong is when I lie in bed at night and, instead of sleeping, stare at the ceiling and start to imagine that if I do one more post about the theater, I’ll lose all my readers. Isn’t that crazy?! But admit it; when you’re in bed and on the threshold of sleep, you think a lot of crazy thoughts, too. Right?

Well, I decided that to hell with all of you! I’m going to continue doing my theater posts and if you don’t like it, well, you can just…I don’t know what but I’m going to do them anyway.

(If you thought that was sad and crazy, you should see what’s going on inside my head that I’m not revealing to you.)

RED is Dr. Octopus—oh, excuse me—I mean Alfred Molina as egomaniac artist (is there any other kind?) Mark Rothko. I loved it but I think it’s got very limited appeal. It makes you feel all smart and brainy if you’ve heard of the artists mentioned. They talk a lot about influences and the arc of contemporary art history. Do you like that stuff? Then go. You’ll love it. Molina really is in top form. The play was a big hit at the Donmar Warehouse in London and Eddie Redmayne, who plays Rothko’s studio assistant, won all sort of well-deserved awards. They might give him one here in New York, too. All the critics love him in New York. But be warned, it’s pretty chatty.

Best moment? The two prepare a huge canvas with a base coat of paint. They blast some classical music and have worked out an intricate dance whereby Molina paints the top half of the canvas while Redmayne prepares the bottom. It’s interesting from the standpoint that I’ve never seen a canvas prepared, but aside from that, it’s just a ton of fun to watch. It’s fast and live and real-time, and that’s what the theater has over movies. 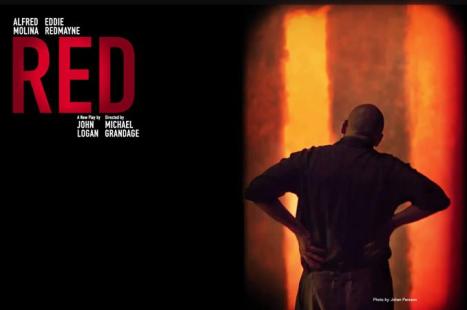