I saw the Marina Abramović retrospective at MoMA. Oh, LORD what an eye full of daring art and crap-ola! As with most performance art, there’s probably some deeper meanings within these pieces that went way over my head, but I enjoyed the them, nonetheless.

Abramović is a performance artist and MoMA is replicating many of her pieces from her 40-year career. The exhibit includes video installations and living, sometimes naked, human beings. Live! Nude! Girls! (And guys.)

Imponderabilia, from 1977, requires that you squeeze through a very narrow doorway between two naked people. They (the performers) have cast iron guts, because you can’t get through the doorway without brushing up against them. 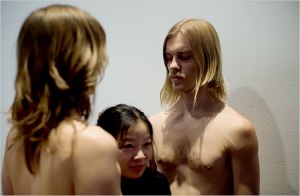 When I first got there, the doorway was manned by two dudes. I prefer my naked performance art to be somewhat titillating so I browsed around the video installations until shift change and there was a girl present. Tee-hee.

People have gotten a bit too familiar with the performers. There have been at least three instances whereby someone was escorted out of the museum for inappropriate touching, including one old man who was not only thrown out but he had his 30-year membership revoked.

Rest Energy was a video of Abramović on the wrong end of an arrow. The piece required that someone hold a taunt bow with the arrow pointed at her heart.

In another video, she sat before an industrial strength air blower. It was turned on and she sat in the wind gust until she passed out. In other pieces, she cut herself and/or allowed patrons to cut her with various sharp implements. When these things are done in a cathedral like MoMA, it’s performance art. To me, however, there’s not much difference between these antics and the ones performed by Johnny Knoxville in the Jackass movies.

Relation in Time requires performers sit for HOURS with their hair braided together. 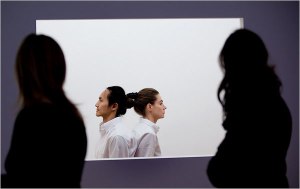 Nude with Skeleton required a naked performer lie down with a skeleton on top of them. The skeleton was supposed to rise and fall with the breath of the performer but when I was there, the girl performing the piece didn’t breathe heavy enough for the bones to move. She was really pretty, though.

The title of the exhibit, and the new piece she developed for the show, is Marina Abramović: The Artist Is Present. She sits silent in a chair in the museum’s atrium and patrons take turns sitting in an adjoining chair. They proceed to engage in a starring contest. All of the live pieces are manned by a rotating cast of volunteers who are relieved at timed intervals. But for this piece, Abramović will sit in this chair, all day, every day, for the entire run of the show.

When I was there, the actor James Franco was participating, thus giving the out-of-towners the double thrill of seeing bizarre New York art AND a bona fide movie star at the same time.

I was kind of pissed because patrons are made to wait in a long line for their turn to sit with Abramović, but Franco was permitted to enter the museum before it opened and take a seat, thus jumping the queue. Not that I wanted to participate, but it seemed unfair to those who did. Goddamn Hollywood fighetta.