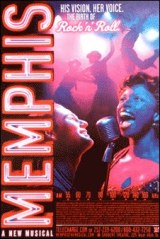 The Tony nominations came out and I actually saw two of the four nominees for Best Musical. I’m not much for musicals so it’s an unusual coincidence.

My pal CB is a writer in the fashion industry and he did a piece on Chad Kimball, one of the co-stars of Memphis. (That’s him in the poster.) Are you ready to feel like an under-achiever? Not only is Mr. Kimball in a Broadway hit musical and nominated for a Tony (Best Performance by an Actor in a Musical) but he, along with his brother, are successful clothing designers. Bastards! Their line is carried in Bloomingdale’s. I’m not sure if you can do better than that.

Mr. Kimball invited CB to a performance and I tagged along. We had house seats. House seats are the best seats in the theater. They’re held back by management for VIP’s, press and hangers-on. When I go to a play, I usually sit in the last few rows of the balcony. It’s all I can afford! Sitting up front is a completely different experience. It’s easier to get sucked into the performance. I guess that’s why they cost so much. Duh.

[Side comment: Many years ago I was upgraded to a first class seat on a flight to Las Vegas. It was a terrible mistake. It warped my perspective. My days of blissful ignorance in coach are over.]

The story takes place as rhythm and blues music was just starting to be embraced by a young, white audience. There is much parental angst in the plot. The songs are genre originals written by David Bryan, a member of the girlie band Bon Jovi, and playwright Joe DiPietro. The music kinda worked for me, but what really sucked me into the story was the performance by the two leads. Seeing two actors inhabit their roles so completely was the real treat of the show. And sitting front and center certainly didn’t hurt.

A public thank-you to CB.

13 thoughts on “That damn race music”