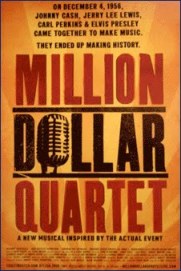 Million Dollar Quartet is the other musical I saw that received a Tony nomination (see below). It’s a jukebox musical! Much to my utter delight, Mrs. Wife joined me for this one.

On December 4th, 1956, Elvis Presley, Johnny Cash, Jerry Lee Lewis and Carl Perkins gathered in Sun Records for a one-time only jam session. This show is not a recreation of that session. It merely uses this meeting as a jumping off point. There’s a loose plot line that involves Sun owner Sam Phillips and a contract with Johnny Cash, but the meat of the show is four actors recreating the hits of these Godfathers of rock and roll.

It is with a great sense of relief that I can report the show is a lot of fun and worth seeing. Why a relief, you might ask? Because this music is deeply important from a cultural standpoint and it isn’t being played anywhere. What radio station plays Carl Perkins songs? None! That Broadway is the vehicle through which it’s kept alive is fine by me. And aside from its legacy, when you hear these songs, you feel a lot better about life and love and loss.

In addition to the Best Musical nomination, Levi Kreis received a Tony nomination for his portrayal of loose cannon Jerry Lee Lewis. To me, his was the most fleshed-out character. But that may be because it’s the flashiest role.

Here’s a clip of the cast performing a medley from the show on David Letterman. Turn it up!

7 thoughts on “Your roots are showing”