If you walk down into my New Jersey suburban basement and look behind the laundry machines in a dark corner, you’ll find this storage container:

It is chock-filled with my old journals. I don’t call them diaries because that would be a bit girlie, wouldn’t it? Journals sounds much more literary. They cover my early- to mid-20s when I first got to New York City. I think. I haven’t been in them for quite some time and am not entirely sure about the time frame.

There are over a dozen filled notebooks. 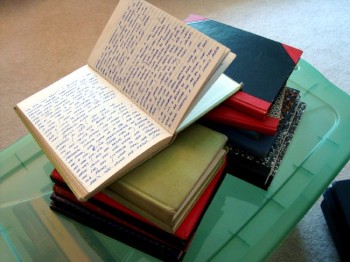 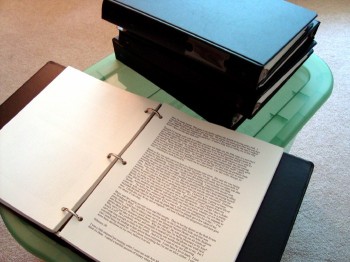 I’m starting to wonder what to do with these. Pretty much the LAST thing I want is for anyone (i.e., The Daughters) to stumble across them. I never considered the problem until just recently. 8-Year Old is gobbling up books at a pretty good clip. So she has skills.

The problem is the content. These were written during a period in my life when I had nobody to talk to. Basically, I vented to pieces of paper and typewriters. The result is that the content is, by and large, unrelentingly dreary. This is where I poured my guts out, and pour I did. To read them, you’d think I had a miserable, wretched existence. We’re talking Dickens. But that’s not the case. I just needed an outlet for my dark thoughts.

I am adamantly opposed to having anyone read these, but I can’t bring myself to set them on fire yet. I tried once. What do I do?

Incidentally, I can assure you that there’s no buried treasure here. There’s no Hollywood ending. It’s very, very, very boring stuff. For real.