I live about two miles from the town center. It’s quaint. You’ve seen a million places just like it. Little mom-n’-pop shops, restaurants, nice places to stroll. In the summer, they have weekend music festivals whereby local musicians play on the sidewalks. They are cleverly spaced apart and around corners so that no one performer interferes with another.

We took The Daughters for a walkabout. We listened to some weepy, sensitive singer-songwriter types and then got some ice cream at the local parlor. In addition to ice cream, they sell “vintage” candy. That’s not to say that the candy is old. It’s the kind of stuff that yuppies use to buy when they were kiddies.

I am happy to report that all of the tobacco products are still represented. Did you ever buy these bubblegum cigarettes? I sure did. If you take one out of the pack and gently blow into it, the powder from the gum will come out of the other end and it’ll look like smoke. It’s genius! If these are intended to be a gateway drug, they worked. I smoked for a few years when I got old enough to buy the real thing. 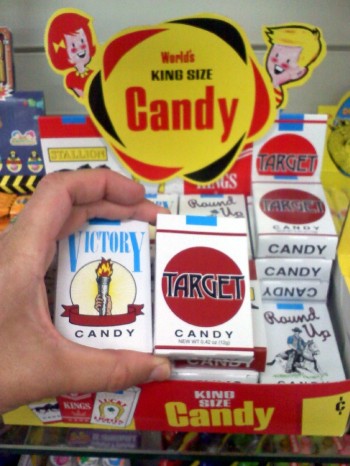 For the more sophisticated (and male) audience, they have bubblegum cigars. My fav was always El Bubble. The “Pink Owl” is supposed to be White Owl cigars. I’m not sure what the others brands are. (Anyone? Anyone? Bueller?) The bubblegum cigars were always kind of hard and they hurt your jaw if you chew them for too long.

They didn’t want to leave out the red neck contingency so they also have bubble gum chewing tobacco. I never bought a pack. Everyone knows that chewing tobacco isn’t good for you. 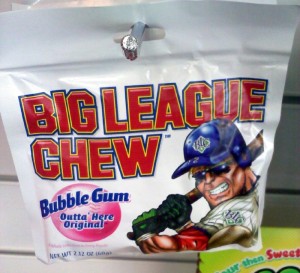 These are candy buttons. Solid sugar. After you eat a sheet, you end up with a wad of wet paper in your mouth. But I always ate them, anyway.

Did you know that if you eat these and drink a Coke at the same time, your stomach will explode and you’ll DIE! That’s how Mikey died, poor thing.