All I wanted to do was see a damn movie. The theaters in Times Square are convenient and have big, whopping screens. The kind that give you a headache if you sit too close. But there’s this:

That’s right. It’s $13 friggin’ bucks to see a movie out here! And if it’s in 3-D, you have to kick in another $5-$7 on top of that! A small soda and a small popcorn set me back $9.50. I asked for the child’s portion and it was STILL enough for two adults. It felt like one of those old-time Times Square scam job. Like a legal Three-Card Monte game.

After the film, (Inception. Quite good.) I walked through Times Square. There was troop of Boy Scouts who had set up tents along a cordoned off strip of Broadway near 47th Street. They were on a camping trip. They were sleeping overnight in the street! For real! 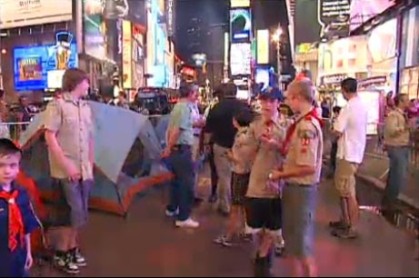 This is crazy. All it would take is one out of control taxi and it’d be instant carnage. And besides, there are nice, comfortable hotels just steps away. This is the most stark evidence of how far this town has come since I first got here. If the Boy Scouts had tried this stunt when I got here, they’d have had to fight off the transvestites for their uniforms and the bums living in Bryant Park for the tents. 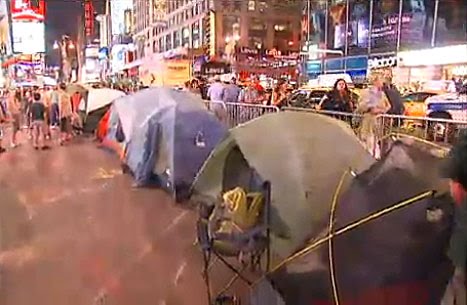 Boy, I hate camping. The closest I ever get to “roughing it” is wearing socks that have holes in them. I work my ass off. I don’t sleep in tents, thank you.