Regular readers know that the current recession has kicked me in the plums pretty hard. For the past 22 months, I’ve worked as a consultant at about a half dozen investment banks, none of whom are in any mood to hire on staff.

Back in 2009, I went through a three-month period of unemployment. Since then, I’ve had scattered 2-3 week outages of work. I consider myself fortunate because I know some folks who haven’t weathered this recession as well as I have, so I’m not complaining. Much. We were never in any financial distress. My Bride and I live frugally and that helped keep panic at bay.

But something wholly unexpected happened during those work stoppages. I tasted what life is like when I’m not obligated to sit in an office all day, every day. And the sweet flavor has lingered in the windmills of my mind. It’s like the time I was gifted a first class upgrade on a flight. Worst thing that ever happened to me! All it did was show me how barbaric coach is.

There’s a lot of life going on outside my Manhattan office window. And seeing The Daughters and Mrs. Wife in the evening is what it’s all about, isn’t it? But that kind of lifestyle takes money. Lots of money. I’m just a regular guy.

I went for a walk at lunch yesterday. It’s been sunny and cool all week. I wound my way through the Village and as I passed the Greenwich Village Bistro on Carmine Street, I heard music.

I poked my head inside and stumbled onto this scene.

These three old rattlesnakes—one on a beaten upright piano, one playing a trumpet with a mute and one playing a trombone—were pumping out New Orleans jazz tunes. At 1:00 in the afternoon on a Wednesday! They were masters of their craft. This is why I love this town so much. You can go out for a walk and it’ll show you a magic trick. Presto!

I took a seat at the copper top bar and ordered some split pea soup. The barmaid called me “hon” and chatted me up. There were only two other tables of customers. They were playing to an empty house.

There was one other person sitting at the bar. A soft, pudgy black guy who was working on a music score. At one point he yelled over to the musicians, “I’m gonna sing one, okay?” The piano player started a mid-tempo chug, the trombone came in, then the trumpet, and the guy sitting next to me sang, in a silky-smooth voice, a song about missing New Orleans. I almost wept into my soup.

There was a guy sitting at a table typing away on his Mac. How did he do it? How did he maneuver through life so that he’s able to spend his afternoons in this grand manner? [Interesting factoid: The waitress in this pic is the piano player’s granddaughter. What a joy it must be for both of them.] 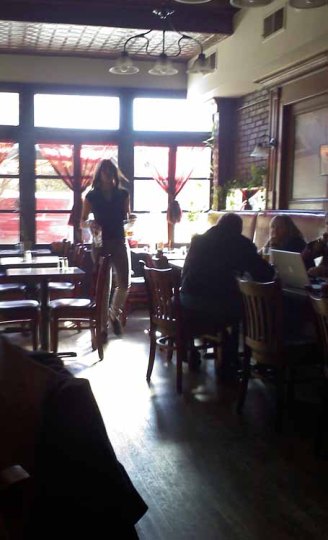 I think it’s too late for me. Do you know they just opened an Edward Hopper exhibit at the Whitney? I love Edward Hopper! He’s a Raymond Carver short story on canvas. Why am I sitting in an office all day? For the past nine years I’ve spent close to four hours a day commuting. There doesn’t seem to be any end in sight. I wouldn’t say that I’m wallowing in some Kafkaesque abject nightmare—I’m not suicidal—but life could, and should, be so much sweeter. Don’t you think?

This is the LAST thing I would have expected unemployment to teach me.

26 thoughts on “The way other people live”