Unlike Bloody, Bloody Andrew Jackson, which got a lot of hype and a lot of press but, ultimately, wasn’t very satisfying (for me, anyway), here’s a play that isn’t making a lot of noise but delivers the goods. 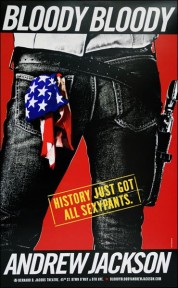 Mrs. Wife said, “Who are they trying to appeal to? Other than you, I don’t anyone who likes both football and theater.” And that’s a good point. A few years ago they had the boneheaded idea of turning Nick Hornby’a High Fidelity into a musical. It was a disaster. Rob, the protagonist of High Fidelity, is the kind of guy who wouldn’t be caught dead at a Broadway musical. Likewise, someone who watches the Green Bay Packers every Sunday isn’t likely to attend theater. But they’d be missing out on a compelling story that would mean a lot to them.

The play is filled with great performances and it absolutely deserves to be seen. It has a little to do with football and a lot to do with the relationship between legendary ball-busting NFL coach Vince Lombardi and his wife, Marie. Marie is played by Judith Light of Who’s The Boss fame and she nails her character’s sad resignation. Likewise, Dan Lauria, storming about the stage, is a convincing Lombardi. The supporting cast does fine work, especially Keith Nobbs as a young journalist who inserts himself into their lives.

A clippy :90 minutes with no intermission. A great venue with every seat close to the action. The actors leave all their guts on the stage. What more do you want, for cryin’ out loud?

11 thoughts on “Hut hut hut. And then, enter, stage right”