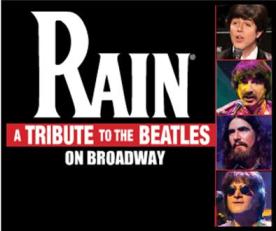 I don’t attend many musicals. They’re not my thing. I quite enjoyed Avenue Q a few weeks ago but I went by invitation so that doesn’t really count. But I couldn’t resist the special offer of a $19.64 ticket to see Rain, the Beatles tribute show at the Brooks Atkinson.

They were celebrating the anniversary of The Beatles coming to America in 1964. Get it? I’d see pretty much anything for $19.64. I’d even see Spider-Man!

The producers, cleverly, assume that everyone knows the history of The Beatles and dispenses with any kind of plot. It’s purely a concert production and whether or not you enjoy it depends entirely on how much you like The Beatles. (A pretty obvious indictment but it needed to be said.) Well, I like The Beatles a lot so I had a fine time.

I don’t think the actors resembled The Beatles in the least, despite the wigs and copious amounts of make-up. Joey Curatolo, the Paul McCartney doppelganger, looked a bit like him. But if you close your eyes and listen, they sound just like The Beatles. There were a few moments of real brilliance and they were masters of their instruments. They worked hard to pull the audience in.

They ran through The Beatles catalog in chronological order cherry picking a few songs from each album. There were a few breaks for costume changes. They ran the gamut from skinny ties to collarless jackets all they way through the Sgt. Pepper outfits, which looked terrific.

Does anyone know where I got the title for this post? No cheating!