On my lunch hour, I visited the Mary Boone Gallery in Chelsea to see performance artist Terence Koh’s latest work, nothingtoodooterencekoh. In it, a (supposedly) 45 ton pile of rock salt was dumped into the center of the gallery and Koh circumnavigates the pile ON HIS KNEES from the time the gallery opens until it closes. It’s madness. 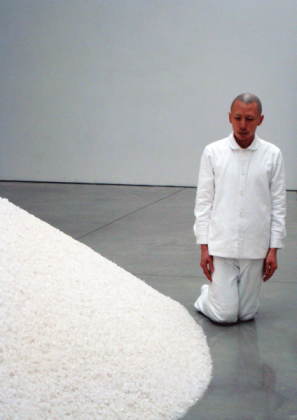 There is no interaction with the audience. He has taken a vow of silence for the length of the run. Sometimes, he lays prostate on the floor in front of the pile. Initially, he was crawling on his knees without the aid of knee pads but he had to give that up because it was tearing his knees up. 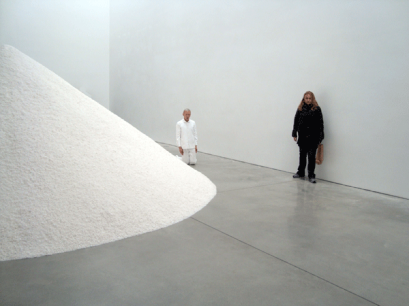 As I said, I was going there because I thought the concept was a big joke. But a funny thing happened. Once there, I got swept up in it and it was actually quite beautiful. I can’t explain it! The pile of salt was a perfect, perfect inverted cone with a sharply defined edge. His white garments seemed to mesh with the salt. The only light was the light that poured in from the skylight. There were about a dozen people there and they were all respectfully silent. There was something very calming about watching the whole thing and I didn’t want to leave but I had to get back to MY pile of rock salt.