This is the Apple store in Soho. 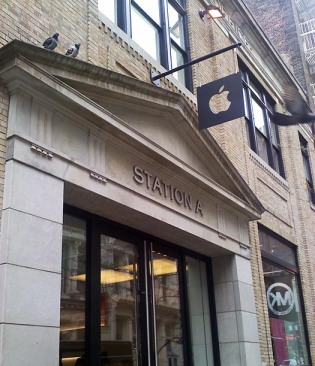 This is a queue of Chinatown residents waiting to get inside.

You’ll stumble across this curious scene in front of Apple retail outlets each time Apple releases a popular product. Are the Chinatown residents obsessed with having the latest cutting edge technology? No, they are not. They are part of an elaborate scheme perpetuated from China, a country flush with disposable income and obsessed with owning prestigious items like Apple products.

It works like this: local Chinese wait in line and pay retail for Apple products, forgoing any contracts with AT&T or Verizon. (In this case, they are after the new, hard-to-get, iPad2.) They will each buy two (the limit per customer) and sell them to a middleman in Chinatown, usually an electronics store. They are then shipped back to China (from where they’re made!) and sold at inflated prices. Last summer, they’d paid $600 for an iPhone 4, sell it to their middleman for $750 and it was resold in China for up to $1,000. Workers can earn up to $300 in a single morning.

Apple tried to clamp down on this trading network but advocates for the Chinese went to the New York State Attorney General and cried that they were being discriminated against, so Apple backed off.

It’s not actually stealing per se, but there’s a wrongness about it. They deprive domestic, legitimate customers of product. They’re a crafty bunch, aren’t they? How do you like them Apples?

15 thoughts on “How the Chinese in New York scam Apple”