Here’s an unhealthy trend. I’m hoping it’s just a New York City thing and not widespread. People are together, but not really. 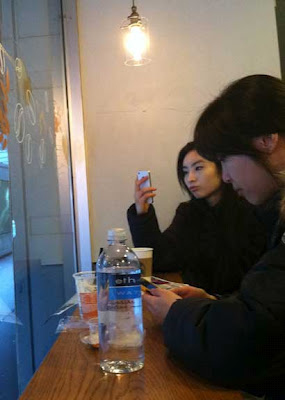 In bars, restaurants and coffee joints, people arrive in pairs but soon lose themselves in their electronic devices. Apparently, the person they arrived with isn’t as interesting as whoever, or whatever, is on the other end of that tether. 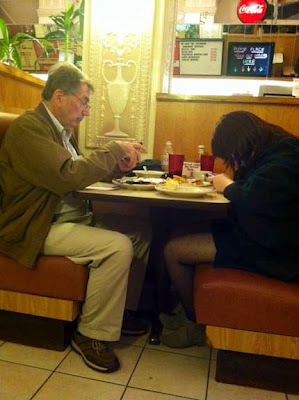 I’ve been watching this closely and it’s not just a matter of checking email and then getting back to the company at hand. People spend extended periods of time on their smartphone, completely disconnected from human contact. 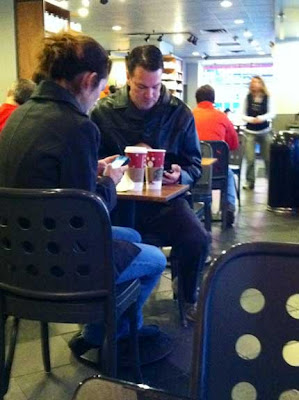 I hit a triple with this one. Four European tourists in a Starbucks in Manhattan; three of them pouring over their e-communications. Can you imagine coming to New York City and spending anytime at all sitting in Starbucks texting? That’s not a unique experience. You might as well vacation in Fargo, North Dakota for all it matters. 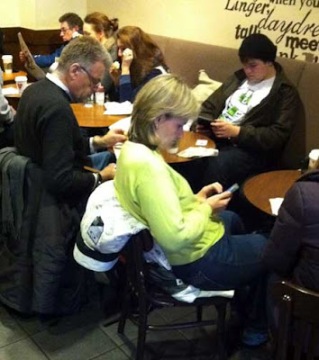 Although I’m sure the mobile phone manufacturers and network carriers are delighted, I find it alarming. It kind of saddens me. I’m going to try and insure that The Daughters are mindful of this and encourage them to rise above it. Perhaps this is the answer: sharing your obsession. 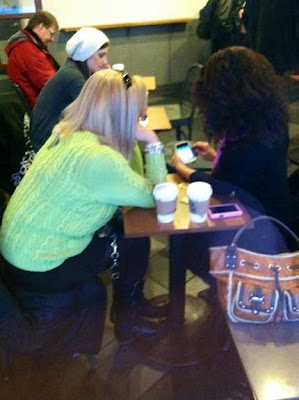 After Facebook goes public, it’s estimated that it’ll be worth upwards of $75 billion. That’s billion. Pretty impressive for a company that doesn’t manufacture anything.

They have something far more valuable than anything coming out of Detroit or shipped over from China. More useful than what our friends at Apple gave us. Do you know what they have to sell?
Personal data.
Lots of folks will pay dearly for personal data. Corporations. Governments. When Facebook shareholders start demanding greater profits to justify that $75 billion price tag, they’ll dip into that resource and sell it to the highest bidder. Don’t like that idea? Good luck getting all your personal stuff expunged from Facebook. I keep telling 10-Year Old Daughter, once you put it out there, you’ll never get it back.
Mrs. Wife’s friend recently posted the fact that her husband won $1,000 on a Super Bowl bet. Why would you put something like that out in public? I hope the IRS isn’t trolling for tax cheats. Don’t laugh. They might be.

24 thoughts on “Are you receiving me?”

Leave a Reply to Ponita in Real Life Cancel reply