There’s a lot of mush slopping around inside my head but none of it feels worthy of fleshing out for an individual post. On Abbey Road, The Beatles took several half-finished song fragments and turned them into what is now considered a medley masterpiece. I’m going to co-opt that idea and maybe make one halfway entertaining post out of a bunch of flotsam and jetsam.

Is there a handy guy or gal out there who can give me some painting tips? Why is this always happening to me?

WHY IS IT that when I pull off the painter’s masking tape, it takes some of the paint with it? I wait 24 hours until it’s dry but it still happens every single time. 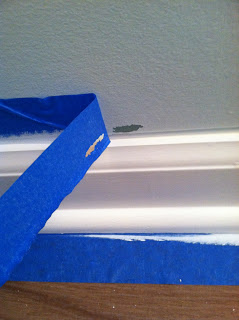 I thought this shit was supposed to be super non-adhesive to prevent this sort of thing from happening? I always end up with a lot of extra touch-up work when any normal handy guy or gal would be done. It’s annoying.
*     *     *

Rooting for the New York Yankees to win is like rooting for Goldman Sachs to post record profits in the third quarter.

Do you remember the Wantologist nonsense from the previous post? Well, here’s another winning profession courtesy of, once again, the idiot features editor of The New York Times.

Lynsey Stone [already the “unique” spelling of her first name tells me what direction we’re headed in] has morphed from ordinary photographer to a Birth Photographer. A Birth Photographer will rush to the hospital when a woman has dilated six centimeters. There’s a growing demand to capture the blessed moment when the baby first appears and share those photos (where else?) on Facebook. The photos have to have artistic merit. Mere snapshots are inadequate.

A woman in Long Beach, California shelled out $1,895 to have the birth of her child documented. Quoteth her: “That moment when both my husband and I look to see what the sex is? That’s something that I want to see happen.” Can you imagine being married to that? The Birth Photographer interviewed spoke of “Divas” who insist that their faces be depicted from certain flattering angles.

I remember when I was in the delivery room when Daughter #2 arrived. During the labor, I whispered gently into Mrs. Wife’s ear, “You’re doing great. Breath.” She looked over to me and said, “Will you shut up!?” No diva, she!