Nothing irritates me more than texting while driving. It’s a thing with me. I get much angrier than I should. The amount of anger that washes over me is so grotesquely out of proportion to the offense being committed that I consider this one of my problems. When I see someone texting behind the wheel, my first impulse is to run them off the road. That would be crazy. Right?

The bus drivers who take me in and out of the city on a daily basis are not a happy bunch. It’s a difficult job. They’re not looking to make any new friends. They mostly come off as being curt, edgy and are prone to scowl and grunt at you as you climb aboard. It’s all your fault.

But one guy makes an effort to be customer-friendly. Always a greeting. Big smile on his face. A real sweetheart.

So what do I do when I find this gentle soul amongst a team of marauding huns texting while driving a bus load of lemmings? 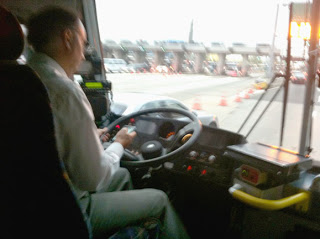 Do I turn his ass in? Because he’ll probably lose his job. 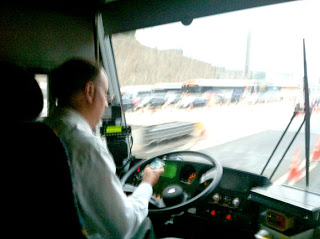 We were flying out of the Lincoln Tunnel and entering the helix onto the New Jersey Turnpike. It’s not like we were stuck in traffic and at a standstill. See how the cars in other lane are blurred? 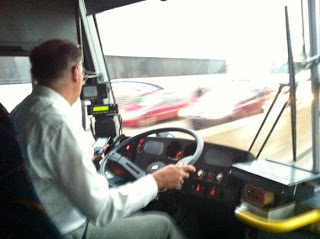 In this last pic, he’s using BOTH HANDS to text and steers the bus with the back of his left hand.

Imagine my daughters being told that dad died in a bus wreck and that the wreck occurred because the driver was TEXTING. And never mind the loss of life. The company would be brought down by the weight of all the litigation.

Do I send these photos to the bus company, which will probably get him fired? Or let it go and be glad I survived the incident?

25 thoughts on “A moral quandary: What would you do?”