This is Columbus Circle. It’s located at the southwest corner of Central Park. That’s a statue of Christopher Columbus atop the pedestal.

In his temporary installation, Discovering Columbus, artist Tatzu Nishi constructed a living room around the statue. Viewing is free but you have to have a timed ticket. You access it by climbing up four flights of scaffolding.

Once atop the scaffolding, you walk down a short corridor that looks like any other city apartment hallway and turn right into the living room. 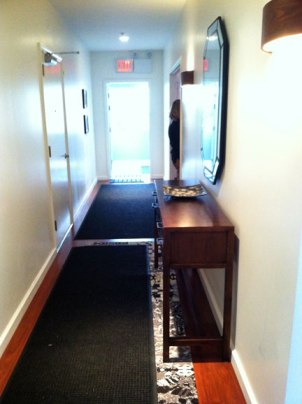 The clever conceit is that a coffee table was constructed around the statue so that Columbus looks like a ornamental sculpture sitting atop.

The living room has comfortable furniture and a flatscreen TV playing an all-news channel. There are newspapers, magazines and books haphazardly scattered around the coffee table.

The exhibit is an unintended real estate wet dream.

It’s the view from my living room window that I’ve always fantasized about but will never actually enjoy.

The guy who sits next to me in this beehive is a die-hard New York Yankee fan. Recently, he turned to me and said, earnestly and with a profound deep belief, that the reason the Baltimore Orioles made it into the playoffs this season (a rare occurrence) is because “they were inspired by the winning tradition of the Yankees.” In his befuddled mind, the Yankees were indirectly responsible for the Orioles’ success. All Yankee fans are delusional idiots. They’re the reason I soured on baseball when I moved out here.

I read in the paper that the Detroit Tigers have been handing the Yankees their asses in the playoffs.

Self portrait #6. That’s me on the left.