Take a look at this bit of fun that’s on display in MoMA’s atrium until the end of the year. Seemingly rational, mature adults are dancing and flailing their limbs in front of a giant lightbox. This installation is Shadow Monsters by British artist Philip Worthington. Before throwing a shadow up against the wall, it’s first filtered through some custom Java script and physics software. This is the result:

Not only are the images distorted, but motion-generated sounds are added to include chirps, grunts, squeaks and, best of all, great, wallowing belches. Groups of people are fun to watch because they generate the most noise, but there’s a beauty and elegance to watching a lone dancer.
*     *     *

In honor of the holiday season, American Atheist erected a billboard just north of Times Square. 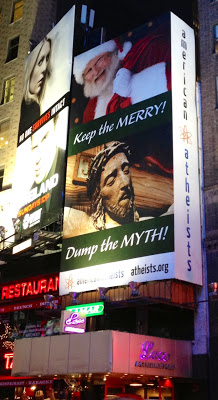 This is pretty inflammatory stuff and it’s going to offend a lot of people. Some poor mom and pop just want to bring the kiddies to Radio City to watch the Rockettes high-kick. They turn the corner and get smacked with this. The next thing you know, the kids are asking a lot of uncomfortable questions.

The atheists aren’t going to win any converts this way. Aside from the name-calling, they’ve mixed up their holidays. It looks like they’re referring to Easter. My initial reaction was a surprise to myself. Instead of passing judgment on the appropriateness of the message or sparking an internal debate over whether or not God exists, I was overwhelmed with a sense of pride that I live in a democracy. You’d never get away with something like this if you lived in China or the Middle East. Can you imagine if you lived in Iran and put up a big billboard implying that Allah is a myth?! You’d get chopped up into tiny morsels.