I got memed! I suppose that’s better than being maimed. Is that even a word? Memed? It’s a verb, right? Mrs. Savannah pinged me to answer the following questions and I am happy to oblige. Anyone who’s been here a long time will find these answers somewhat redundant.

1. If you could change one thing in your life, what would it be?

I’d have gone to college and gotten a degree. Who knows how far I could’ve gone? I wouldn’t have wasted all those years wracked with low self-esteem. I also would have tried to get something published. I was so certain that I’d fail as a writer that I never even tried. I never gave myself a fighting chance. I’ll have to warn The Daughters about such self-defeating tendencies.

That was two things. Tough shit.

2. If you could repeat any age which would it be?

One early Sunday morning in the springtime of my 26th year, I was sitting alone in my apartment in Brooklyn. I was reading the Sunday New York Times, a cup of coffee next to me. One of my cats, a sliver Siamese named Mr. Chow, was sitting in my lap. I lived in the top-floor apartment of a brownstone that had two tall bay windows. It was Sunday-morning quiet. The sunlight poured in and spilled onto my hardwood floor. Lying in the center of a sunbeam was my other Siamese cat, Lucy. She looked at me, blinked slowly, contentedly, and raise her chin a bit. She swished her tail.

I was seeing a pretty girl at the time. We were both quite fond of one other but we weren’t in love. There was no jealousy or need. I liked the work I was doing. I was in excellent health. I was still acclimating myself to New York, which was exciting. I was kind of broke but didn’t care. I felt free. Something washed over me and I thought, “This is as happy as anyone can ever hope to be.”

3. What really scares you?

Losing my family. I’ve lost jobs. Lost money. Lost love. You think you’ll never get over it, but you do. What would I be if I lost my family? I’d be nothing.

4. If you could be someone else for a day, who would you be?

I’d be Jesus Christ. No joke. Because then I’d know if I really was the Son of God. Then I’d finally know the truth to one of the greatest mysteries. I am wracked with doubt and I’d like to know, once and for all. Wouldn’t you?

Do you have any friends who are actors? Ask them and they’ll tell you: when inside a theater, you’re never supposed to say “Macbeth.” It’s bad luck. Amongst the acting community, the play is referred to as “The Scottish Play.” It’s silly but fun. That’s what this planet needs. More silly but fun. 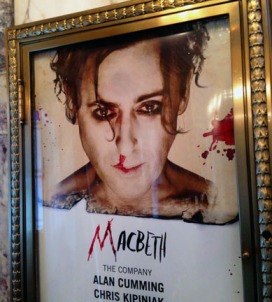 Patrons entering the Barrymore Theater are met with this advisory: 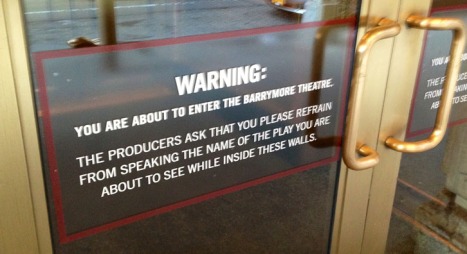 That’s a first. What do you think? Is that pretentious? Before the show my friend bought a round of drinks. One Jack Daniels (a double) and one Maker’s Mark. $45. $45! (Albeit, including tip.) It’s the most I’ve ever seen anyone pay for two drinks.