My office has elevator TV. Step into almost any lift in Manhattan and you’ll be greeted with a TV screen that broadcasts ads, news, sports and entertainment tidbits. They show pie charts from USA Today. I defy you to tear your eyes away from the screen as the car shoots up to your floor. You can’t. It’s insidious brilliance.

[Almost as insidious and brilliant as a cigarette campaign I saw at an ad agency I worked at many years ago. They went to local beaches and passed out rubber flip-flops for free. Embossed on the bottom were the Camel cigarette logo and image of Joe Camel (remember him?). People—kids—walked on the beach and left an impression in the sand. I saw photos of beaches COVERED with Camel logos and Joe Camel’s phallic face. They were called “Camel Tracks.”]

Elevator TV is broadcast by Captivate Network, which makes perfect sense because we’re captured like rats in a ticking trap. Cheeky bastards. They ran this news blip the other day from the AP wires: 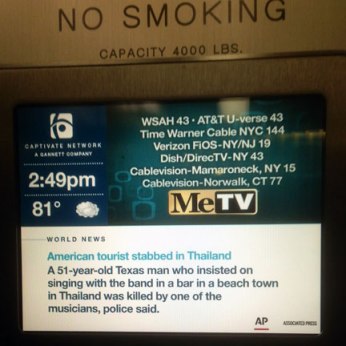 It’s not funny. I’m not trying to imply it is. The man was murdered. But can you see how this all went down? A loudmouth American—a Texan, no less—drunkenly pushes his way onto the stage and wrestles the microphone away. Starts yelling into it. Feedback. The musicians, who probably take pride in their work, look on with contempt. One of them snaps, stab, stab, stab. Lights out. If you’re a guest in a foreign nation, mind your manners, pardner. Giddy up.

I wish I’d invented elevator TV. I wouldn’t be typing this from a coffee shop at 7:09 a.m. before facing the Captivate Network. I’d be typing it from a beach in Tahiti sometime after 2:00 p.m.

Speaking of coffee shops, just look at this poor bastard sitting next to me.

He was simultaneously juggling three—three—devices; a laptop, an iPad and an iPhone. Wasn’t the promise of new technology to set us free and simplify our lives? What a lie THAT turned out to be! After I watched this sorry show, I meditated on leaving my iPhone at home for one day. Going an entire 24 hours without touching it. Do you know what? I have a modicum of self-awareness and I don’t think I can do it! Could you? Seriously. Could you? We should all try it as an experiment. Verizon and AT&T won’t like this idea one bit.

Coco and some of her neighborhood pals. They really do enjoy each others company, all appearances to the contrary.

If you are an old man thinking of taking early retirement, you should read King Lear first. If you are a middle-aged man thinking of marrying a younger woman, consult Molière before-hand. If you are a young man and you think that love will last forever, you might wan to take a gander at Wuthering Heights before making any long-range plans.

Joe Queenan
One for the Books