I’m not a big fan of dance. I don’t get it. I’ve attended numerous performances over the years—everything from traditional ballet to modern—and it all looks like a lot of people with 0% body fat imitating dying poultry. But there’s something about Indian dance that shakes me to my core. I meditate (poorly). Perhaps therein lies the connective tissue.

Legendary Lower East Side performance space La Mama is jam-packed this week with performances from Drive East, the Indian music and dance festival. It’s an intimate black box theater that, while lacking in amenities, is ideal for dissolving the space between performer and audience. The caliber and athleticism of the dancers—Kalanidhi Dance—is extraordinary.

This dance, Alokaye Shri Balakrishnan, tells the story of Krishna, who brings his cows to the river to drink. They all die because the water has been poisoned by the serpent Kaaliya. Krishna hunts the bastard down, taunts him and a fierce battle ensues.

Synergy blends elements of traditional and contemporary dance and music. The video is relatively brief because I accidentally touched the off button. Hold your applause.

The biggest surprise is how percussive the performances are. Being in such a small space, you hear the fleet slapping the stage and the bells on their ankles. It’s exhausting to watch. I had to nap on the way home. 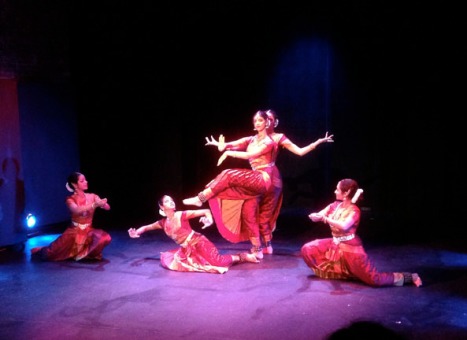 32 thoughts on “Krishna on 2nd Avenue”