British comedian Alan Carr famously said that meeting Paul Newman was a crushing disappointment. He said Newman looked old, frail and all too human. But I received an invitation to meet someone I’ve admired for years and had I declined, I think I’d have regretted it.

When you’re young and living in Manhattan and you meet someone new—for instance, a pretty girl—there’s a dance whereby you search for a common thread with which to start a conversation. You look for a shared experience to build a relationship and when you’re in your early 20’s, that shared experience, more often than not, is college. When I’d meet a girl and she’d ask what college I went to and I said I never went to college she’d start looking over my right shoulder to see what was behind me. And trying to land a job without a degree on my resume was extraordinarily difficult. They were debilitating years.

I’m a low-level rare book dealer. I could never make a living by dealing. I’ll see an undervalued rare book on the market and buy it with the intent of flipping it and making a few quid, but once it’s actually in my hands, I can’t bear to part with it. So I’m more of a collector. I began collecting to bolster my image and self esteem. Collecting books is seen as an intellectual pursuit so I decided to wear that mantle. It helped. I’d find a way to wedge it into a conversation and I’d get some mileage out of it.

Then something unexpected happened. I started to enjoy collecting for what it was. Not just for the visceral reasons, but because it’s interesting. I enjoy trolling used bookstores and rare book fairs. My favorite fragrance has changed from a sizzling steak to paper, ink and glue. I became interested in their history, construction and preservation. I fell in love with books.

The first author I collected was Charles Bukowski. This was long before he attained mainstream popularity and his rarities became prohibitively expensive. I felt a kinship with Bukowski’s difficult childhood and hardscrabble existence. I worked in a breadcrumb factory once. It felt like something Bukowski would’ve done.

Bukowski was discovered, nurtured, edited and published by a guy named John Martin. He built his Black Sparrow Press on Bukowski’s success. I wrote to Mr. Martin many, many years ago and asked a series of neophyte questions about collecting Bukowski. He took the time to patiently answer each of my idiot queries. Over the past 20+ years he has continued to provide valuable guidance about two things that I care deeply about; books and life. You’ve probably never heard of him before but Mr. Martin is a pretty big deal in the independent publishing community and the fact that we correspond regularly is something I never could have imagined when I first read War All the Time all those many years ago. I certainly never thought we’d meet.

In September, I took my bride to Napa Valley for her birthday. As it turned out, we stayed not far from Mr. Martin and his lovely wife Barbara’s house. A dinner invitation was extended and OF COURSE I accepted. I was nervous and worried that what has been sustained over the miles and years could not be replicated at a dinner table. I thought there would be long, uncomfortable silences. I thought our chemistry only existed in the ether. That, as it turned out, was piffle.

The conversation flowed as freely as the Pinot noir. It was a joyful evening. One I’ll never forget. The four of us were comfortable in each other’s company. As you can imagine, he told incredible stories and, after dinner, knowing my Achilles heel, showed me some stunning books and original artwork.

When you collect books, it’s all about the signature. I brought one of my collectables for them to sign. My Bride questioned the appropriateness, but when I asked permission I was told to bring as much as I could carry and they’d sign anything.

This is Bukowski’s novel Factotum. It’s a limited first edition signed by Bukowski with one of his oil paintings bound in. It’s dedicated to the Martins. Having a copy signed by the author and inscribed to me by the dedicatees is deeply meaningful to me, for the right reasons. 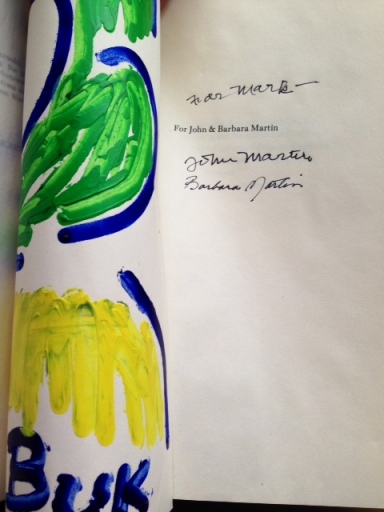 33 thoughts on “Should you meet your hero?”