Each morning, I have one hour to myself, from 7:00 to 8:00. It’s the only time of my day when someone doesn’t require my attention. At work, at home or even walking down the Avenues, it seems like someone is always in my face. During that peaceful morning hour, I sit in the same coffee shop and either read blogs or write or pop my earbuds in, listen to Howard Stern and make loud snorting noises that cause people to stare.

Recently, an elderly derelict has taken up residency in the same coffee shop. He’s always there during my morning caffeine ablution. He’s not homeless or insane–he doesn’t smell bad or babble incoherently–he’s never drunk. But he’s clearly on government assistance and doesn’t have anywhere special to be during the day. He takes the seat near where customers wait to pick up their coffee order. Customers who are, more often than not, tourists, this being midtown Manhattan.

His move it to engage someone in conversation while they wait. But once they have their coffee, they’re not free to go. His stream-of-conscious dialogue doesn’t have a natural braking point and since most tourists are nice people who don’t want to appear rude, they stand there, trapped, nodding their head and sipping their coffee. Perhaps they feel they’re having an authentic New York moment. He tells them about hanging out in Studio 54, a book he wrote, an album he recorded and other sundry events that are entirely plausible. But eventually they start that slow dance towards the exit.

I never engage him. I know he’s lonely and just needs someone to talk to, but my heart hardened years ago. When I first moved to NYC, I used to carry a pocket full of quarters to dole out to the homeless on the subways and streets. If I didn’t have any change, I’d at least make eye contact so they felt like human beings. But it became too much. I was overwhelmed by the tsunami of sadness, so the destitute became invisible to me. It’s a defense mechanism many New Yorkers employ. A coping device to help deal with the grind of the city.

I’m one of those poor bastards trying to sort out the Affordable Care Act. I’m just a consultant and need healthcare for my family. I won’t go into the details because how boring would that be? But here’s how another in a series of live chat sessions opened yesterday. It tells you everything you need to know about how well the system is working.

I made my annual holiday pilgrimage to the Morgan Library to view the original manuscript for A Christmas Carol. From Dickens’ own hand, a cultural touchstone was born. 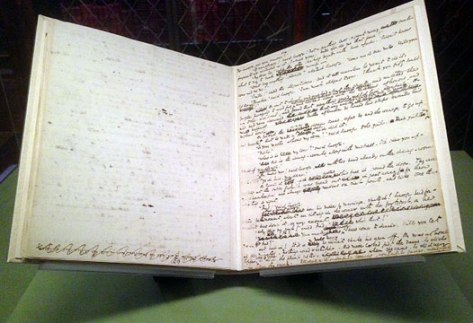 Just look at this mess! This stuff is such a thrill for me. How the printer was able to make heads or tails of this is a mystery.

I read A Christmas Carol every December. It puts me in the proper spirit. It’s maudlin and overwritten, but it gets the job done. I have to read those last several pages alone because I always see them through a veil of tears. Scrooge’s transformation washes over me. So embarrassing.

“For it is good to be children sometimes, and never better than at Christmas…”