My new job has me completely buried in the weeds. It’s a workload I’ve not experienced for a long time. I’m also trying to figure out the politics and personalities. I’m overwhelmed and exhausted. I don’t have time for a proper post so in the meantime, here’s another bon mot from my old journals. As usual, I make no apologies, etc., etc. The usual disclaimers.

I took Cindy out. She’s always my last resort when nobody else is around. I wonder if she realizes that? Knowing her, she probably does and doesn’t care. The theater, a couple margaritas at Mary Ann’s and then kissing in the shadows on the corner of 2nd Avenue and 3rd Street. Her kisses are really wet and slippery. Over drinks, she said she’s sad that she’s back in the same boat with Laura that caused them to break up in the first place. She thought it’d be different this time but it isn’t. It never is, is it? Listening to people talk about their relationships makes me glad I’m not in one. They seem like such a burden.

We were out last weekend bar hopping and listening to bands and Laura was following us around on her bike from a half block away. We’d walk into a bar with Laura watching from across the street and when we’d leave, she’d still be there. Then we’d walk up Avenue B to the next bar and she’s peddle slowly from a distance. Cindy was laughing at her but I felt kind of bad. I hope Laura doesn’t stab me or anything.

After we kissed for a while I asked her to come over tomorrow night to watch the Presidential debates. I remember watching the last set of debates four years ago with that girl from Nottingham. The one with the smelly feet. What the hell was her name? Her feet smelled like a litter box but I didn’t care because of that accent. I loved how she said my name. Maahhhk.

Cindy just called. She can’t come over for the debates because she was able to book time in the recording studio. So that’s that. Her stuff is really good. I hope she makes it. [Note: She didn’t.]

I was alone tonight and happy for it. I went to Cafe Mogador on St. Mark’s place. I had a bowl of split pea soup and then a cappuccino. I watched the pretty girls come and go. I’m invisible to them.

A few days ago, while walking down 2nd Avenue, some guy asked me for a dime for bus fare. The bus was approaching and all he needed was 10 cents but I didn’t give it to him. I felt terrible afterwards. A lousy dime! What the hell’s the matter with me?! So I made a commitment to be more generous. More humane.

Tonight, a derelict was sitting in the middle of the sidewalk with an empty coffee cup in his hand asking for handouts. I dug into my pocket and threw some change in. At the last second, I saw that my ONLY subway token fell into the cup. I asked him, “Can I have my token back? It’s my ride home.” He said, “Sure!,” dumped the contents into his hand, picked out my token and gave it back to me. He joked that even though he doesn’t have a home, he didn’t want to prevent me from getting to mine. We both laughed about it. So I feel a little more human tonight.

To celebrate my new yob, I had dinner with my lawyer pal, Rob, at The Oyster Bar in Grand Central Station. It’s a genuine piece of Olde World New York. A landmark. It opened in 1913 when Grand Central Station opened. The vaulted, Guastavino ceilings made of off-white tiles are a distinctive architectural flourish. 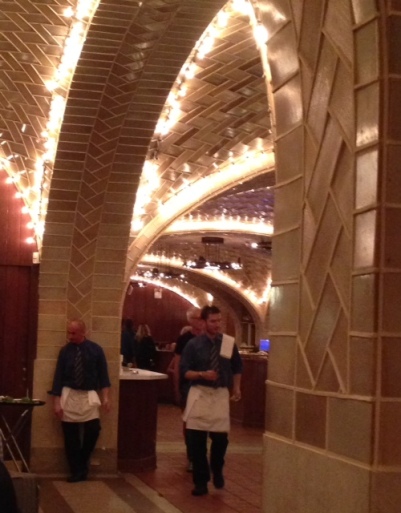 Who knew there were so many different types of oysters in the world?! The menu changes all the time, even as the evening progresses. 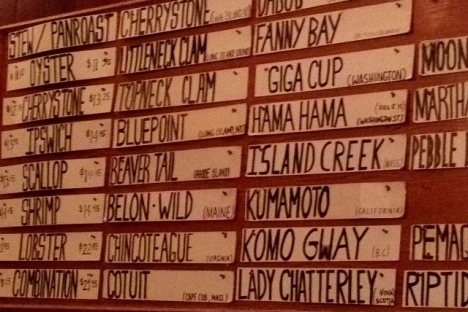 We usually order a dozen from the east coast and a dozen from the west. More if we’re still hungry. In honor of my having recently scaled Mt. Sons and Lovers, I chose the Lady Chatterley’s. They were succulent and delicious. The trick is to not drown them in horseradish, lemon or cocktail sauce. The flavors are subtle and you can lose them if you’re not careful.