…for outdoor art installations. The city is littered with these things—and I mean that in the good way. Not all of the installations work—I’ll spare you the sight of the ones that don’t—but here’s one that amused me.

It runs through the center of Times Square—Broadway between 44th and 45th. This is Nearness by Cuban artist Arlés del Rio. It’s a simple concept that works because of its placement. It creates a nice flow. 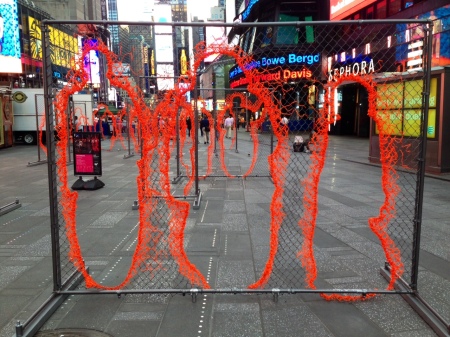 They’re exactly what you see; a series of chain link fences with the centers cut in the shape of silhouettes. They’re participatory, which I always like. People walk through them and have their pictures taken while standing in the middle. You don’t see anybody in these photos because it was 6:00 a.m. and anyone in their right mind is still in bed, not traipsing through Times Square. I think the exhibit is more striking without people around. 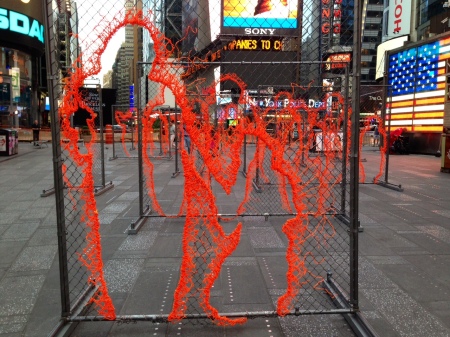 According to the literature provided, these figures metaphorically represent

“…the social, political, cultural and personal barriers, among others, that may keep us away from one another.”

These concept descriptions are always too high-minded for me. They always sound like ArtNews blather. Perhaps the artist needs that gobbledygook to feel connected to his work but I always take it at face value. I’m the opposite of complex.

This one’s my fav. Placed in front of the Times Square military recruiting center.

Next up: a Jeff Koons horse.

While daddy’s at work, proud new mommies often bring their babies into the office for show and tell. The little bundles of screaming joy always have names like Halston or Eureka. [I recently saw Tiffany but it was spelled “Typhanie.”] Someone just paraded a stroller through the corridors here at work. It’s a disruption but everyone has to feign interest. Like when you’re forced to sing happy birthday in the break room. I’m guilty, too. I brought the first daughter in when she was born. Not the second one, though.

What I’ve noticed over the years is that when it’s the wife of a senior executive, it’s always the wife, the baby and a nanny. I guess if you can afford one, you get one. Why wouldn’t you? But I think it makes them seem frail. Like they’re too delicate or detached to shoulder the heavy responsibility of caring for a baby on their own.

I think that wealth makes some people soft. It robs them of their natural, God-given coping mechanisms. Their grit. Their ability to navigate through adversity or a lifestyle crisis, like a new baby. Instead of planting their feet, striking a defensive pose and dealing, they throw money at a problem and hope it goes away. Here in NYC and on Long Island, you can hire someone to teach your kid how to ride a bike. I’ve worked with and have known some very well-off people. It doesn’t seem to take much to harsh their mojo.

Speaking of mommies. Sex Tape with Jason Segel and Cameron Diaz just opened to disastrous reviews. Only a 20% approval rating on Rotten Tomatoes. It’s toast. I don’t want to say I enjoy reading bad reviews, because that’s not nice, but I laughed at this bon mot from the New York Times review. It said the movie…

“…asks us to believe that Annie is on the verge of selling her blog about motherhood for big money, a plot point that inspired raucous laughter from the press rows at my screening.”

Mommy blogs—hell, blogs in general—are about as rare as oxygen molecules. So the thought that one would actually sell for big money is pretty funny stuff, which I’m certain wasn’t their intent.

69 thoughts on “Summer’s here and the time is right…”