There’s a new cruelty being foisted upon the middle income denizens of Manhattan. A whole new insult that was dreamed-up by real estate developers. Do you guys know what a ‘poor door’ is?

In a blatant attempt at fairness, New York City passed an ordinance requiring new residential buildings to include a small percentage of units that are to be sold as affordable housing. For example, a new building nearing completion on the Upper West Side has a few units that will be occupied by families earning $35-$55K annually. Don’t weep for the developers. They are given a significant tax abatement for providing these middle-market units.

Apparently, developers are worried that their upper-income tenants will be so unnerved by the sight of poor people that they managed to get an amendment allowing them to create separate entrances and lobbies; one for their wealthy residents and a second one on an opposite wing of the building for modest-income residents. It’s been unofficially christened the ‘poor door.’

In already existing buildings, amenities like rooftop gardens, gyms and playrooms for children are added to lure high net worth individuals. Access is being restricted to just those new tenants who are paying market-rate rents. The existing tenants who pay below-market rents are not permitted to use these new facilities. One developer was quoted as saying the gyms are being installed for new, market-rate paying tenants, not to please the existing ones.

Let’s give them the benefit of the doubt. Let’s say that someone with significant wealth wants to live around like-minded individuals. Fair enough. That being the case, why, in God’s name, would you choose to live in New York City? This place is an economic and racial bouillabaisse. If you’re that put-off by the sight of poor people, go live in Los Angeles or some other economically segregated city. If you can’t live without the East Coast, move to Westchester County or Darien, Connecticut. Those places have laws on the books that make having a modest income a criminal offense.

I want to live on the Upper East Side
And never go down in the street.
Splendid isolation
I don’t need no one

Class segregation has been around for a long, long time. Just ask the Brits. But there’s a mean spiritedness at work here. What is this dark, human desire for exclusivity? Is it biological? Something that’s a natural occurrence amongst tribes? Or is it a learned behavior? Isn’t this how horrible things like wars and organized religions start?

With a million neon rainbows burning below me
And a million blazing taxis raising a roar
Here I sit, above the town
In my pet-palliated gown
Down in the depths
On the 90th floor

Down in the Depths (on the 90th Floor)
Cole Porter

Of course, my outrage is because my mother would have been forced to use the poor door. I internalize everything. I’ll own that. I spent some time in therapy and developed a modicum of self-awareness. But aside from that, seeing people treated like second class citizens by a bunch of real estate and hedge fund douche bags irks me a little bit. Plus, they’re scarring this beautiful/hideous city of mine. They’re turning it into Phoenix or Seattle or Tampa or Houston or Omaha or Pittsburgh. All fine places, but each one as vanilla and interchangeable as the next.

Here’s another snappy summer outdoor art installation. I didn’t use to like Jeff Koons’ work but then I got over my bad ass self and now I enjoy it. 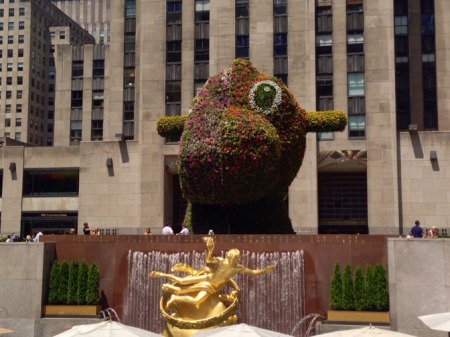 His latest is Split Rocker in the plaza of Rockefeller Center, where they put the Christmas tree. It coincides with his career retrospective currently at the Whitney. (A show important enough for me to call in “sick” and attend.) 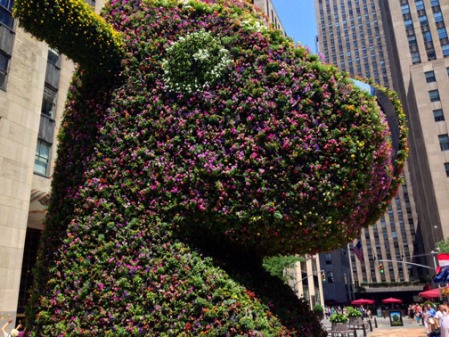 It’s a flower-covered stature of a child’s rocker split in half. I brought the girls in to see it before they dragged me to Matilda.

One side is modeled after a toy rocking horse that belonged to one of the artist’s sons, and on the other side is the head of a toy dinosaur. 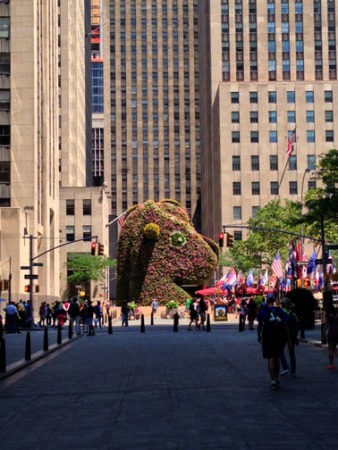 The sculpture is attended to by an army of gardeners. There’s an internal irrigation system that extends to the top of the sculpture. As the summer progresses, it’ll flower becoming fuller and more robust.

I like it. I must be getting soft in my old age.

75 thoughts on “Poor people are repulsive”