hooke·y (ho͝okē) noun informal.
1. to stay away from school or work without permission or explanation.

I take very few things in life seriously, least of all my work. I’m conscientious about keeping a job. I have responsibilities. Plus, I need to fund the things that DO interest me. But I’ve never been one of those career-driven success stories. I envy people like that. I wish I could have embraced a white collar profession, but things like medicine, law, management and high finance bore me to tears. Those things require a significant time commitment and a lot of personal sacrifice. I have a slacker’s heart.

I called in sick in order to view the Jeff Koons exhibit at the Whitney Museum. I told them I had food poisoning. How immature is that? Try to imagine someone who owns his own business or a senior executive in an asset management firm calling in sick to visit an art museum. It just wouldn’t happen. It’s irresponsible. It’s bizarre behavior for someone my age. Why am I blogging about this, anyway?

However, that being said, the Koons career retrospective is special. The Whitney is closing to relocate downtown and they’re going out with a bang. They turned the entire museum over to Koons. It’s unprecedented. I certainly don’t like all of his work but I thought the show was interesting enough to do something as childish as faking an illness. Kak-kak.

Back in the 90’s I didn’t have a lot of respect for Koons. I thought he was much better marketer than artist. Since then, I got over my bad ass self and enjoy some of his pieces because they’re fun, which is what I think he intended all along.

This is Balloon Dog (Yellow) from the Celebration series of the exhibit. Koons made five of these, each one a different color.

Last November, Balloon Dog (Orange) sold at a Christie’s auction for $58.4 million. This one is owned by hedge fund scumbag Steven Cohen of SAC Capital.

This is his latest piece, finished just before the Whitney show opened. It’s a giant, steel sculpture of Play-Doh.

Play-Doh purportedly took 20 years to complete. He’s a perfectionist and was looking for the exact right color and texture. His poor assistants!

Across the room from Play-Doh is Hanging Heart (Violet/Gold), a 9-foot tall polished steel heart.

Balloon Dog, Play-Doh and Hanging Heart are all in the same gallery. It’s like walking into a riot of color and over-sized familiar shapes.

About a month ago I did a post that included Split Rocker, the Koons summer outdoor installation at Rockefeller Center.

The child’s rocker that was used as a model for these giant pieces was included in the Whitney show in the Easyfun series.

Koons has a thing with superheros. Who doesn’t? This is Popeye. It was on display in the courtyard just outside the Whitney cafeteria (where spinach isn’t served). 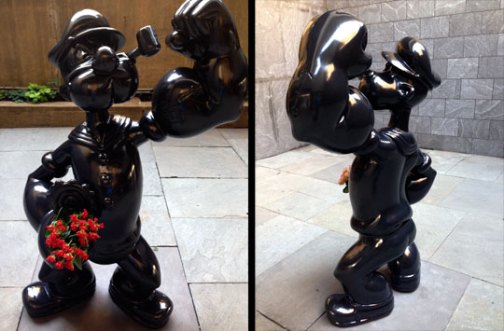 A version of this statue was purchased this past May by casino magnate Steve Wynn for $28 million. Is that all?

This is Hulk (Organ). It’s a fully functional pipe organ. 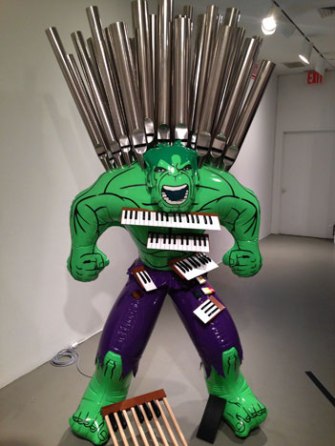 It couldn’t be played because it only has one volume—very loud. The literature said it’s as loud as a helicopter. What a tease!

Speaking of tease. There was a room full of sculptures from his Banality series that included his most famous piece, Michael Jackson and Bubbles.

Before I saw the exhibit, I was thinking that it’d be fun to bring the daughters into the city and see Balloon Dog and Play-Doh. Then I saw these. 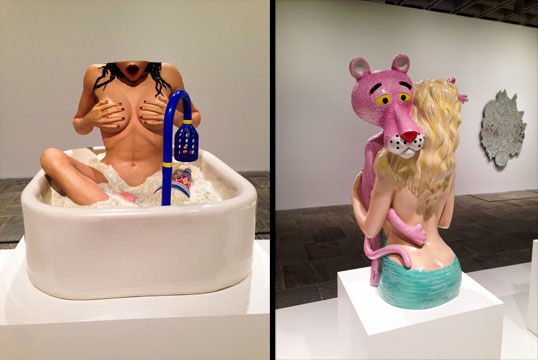 In 2011, the Pink Panther sold for $16.9 million, which was considered a huge disappointment. The estimate had been $20-30 Million. The front of the sculpture can be seen here. There’s some pornographic imagery as well. 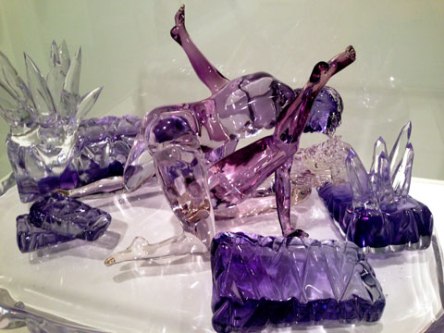 You may have thought the previous pieces were preposterous but wait until you see these beauties. Here’s a gallery full of vacuum cleaners in lighted plexiglass cases. It’s from his The New series he did in 1980.

It defies commentary although I’m certain there’s a high-minded explanation for this.

This is from the Inflatables and Pre-New section. They’re…umm…a toaster and a whistling tea kettle mounted on lights. I was sending pics to my friend and he said, “You took off work for this?!” 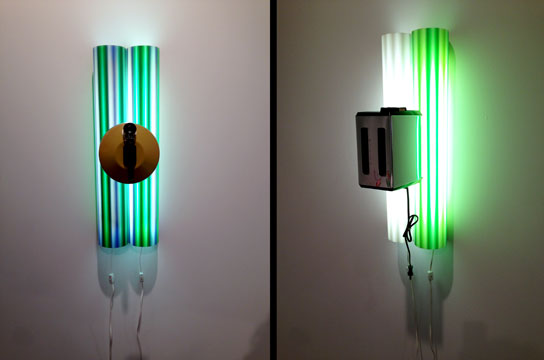 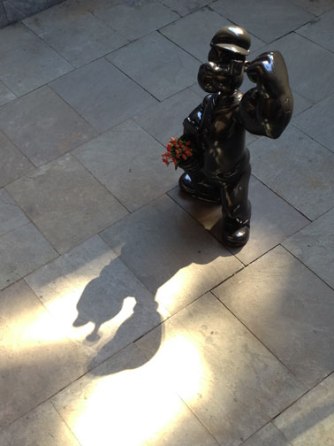