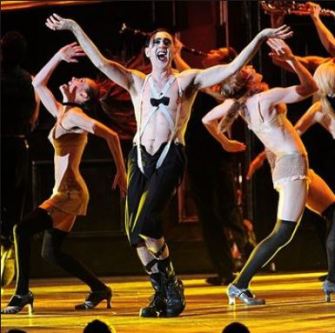 Despite my disdain for musicals, I’ve seen this show a few times. Live performances aren’t like DVDs, mp4 files or Tivo. You can’t enjoy it again later. They’re ephemeral. Once the production wraps and the company disperses, you’ll never see it again—unless they remount the same production, which is exactly what happened here. My Bride and I saw it in 1998 with Natasha Richardson (R.I.P.) as the doomed Sally Bowles. Since then, I’ve seen two other Sally’s in the current revival; Michele Williams, in a valiant but failed effort and, just recently, Emma Stone, who was superb.

He returns the (clearly rattled) audience member back to his/her seat, looks up to the balcony (where I’m always sitting in the back) waves, and says:

“Hello poor people! It must be awful for you. Ah, well. What can you do?”

Laughter. Everyone thinks it’s hilarious, particularly the people in the good seats. But do you know what? It cuts me to the bone every time. It hurts to be laughed at because I can’t afford a decent seat. It makes me feel like I haven’t tried hard enough. Or at all.

Some of my responsibilities at work shifted a few years ago. Instead of designing marketing material solely for Institutional investors, I started working for Private Wealth advisors. I had always known about a category of investor called High Net Worth. It wasn’t until I entered that rarefied air that I discovered a classification above that called Ultra High Net Worth. $50 million or more in investable assets. You’ll never see an Ultra High Net Worth client in a hospital emergency waiting room. They’re never made to wait. For anything. They and their families are accommodated in ways you can’t imagine.

Last Wednesday I saw the New York Philharmonic at Avery Fisher Hall. I wanted to hear piano virtuoso Emanuel Ax tackle Chopin’s Piano Concerto in F and Stravinsky’s Firebird Suite—a couple of real knuckle-busters. I got in for cheap, but my view of the stage was obstructed. I couldn’t see the horn section.

In the ‘become-a-patron’ section of the program I read that if you donate $25,000 annually, you are considered a “VVIP.” I had to look twice because I thought it was a W. That’s a Very, Very Important Person.You get to attend private chamber music concerts in stately apartments on the Upper East Side. First-chair members of the Philharmonic take you to lunch.

In case you thought I was exaggerating.

Larry David is about to open in a new comedy on Broadway. It broke the record for advanced sales. $13 million. It achieved this distinction because the better seats cost $425 and they’re selling briskly. That’s $850 for a pair of tickets to the theater. And, apparently, they’re flying off the shelf.

I am SURROUNDED. This town is choking on money to the point where they have to invent new superlatives to describe über-wealth. To me, they’re simply new benchmarks for my own mediocrity. No wonder I feel inadequate.

ppthbbbt on being poor, indeed.

On the way to Lincoln Center I took a shortcut through Central Park. I saw people gathered around what turned out to be a murder scene.

A hawk was eating a pigeon.

It was a wonderful example of bird-on-bird violence. People move to New York City to get away from this sort of thing.

There’s a healthy hawk population in Central Park. There’s an inexhaustible food supply and skyscrapers have lots of nooks and crannies in which to build a nest. They’ve taken to urban life quite well.

77 thoughts on “My Nose Pressed Against the Window”