I liken this post to the medley at the end of Abbey Road; a bunch of bits and pieces and half-cooked ideas that, once assembled, are an unintended masterpiece.

They removed the stitches from my surgery last Friday at 7:00 a.m. Instead of scurrying to work late, I pointed my car in the opposite direction and drove to Atlantic City.

It was a terrible place to begin with but now, with the closing of so many casinos, it’s worse than ever. Giant, hulking buildings that are empty and boarded up. Concrete ghosts. A town that only ever had a slender chance is now completely without hope. But I can’t seem to help myself. I can’t stay away. I know it’s lowbrow but I love it so much. I can’t account for my fascination.

Only the hardcore and destitute (and me) are gambling at 10:00 on a Friday morning. Towards evening, a different crowd will arrive. Italians with a questionable sense of fashion from Philly and North Jersey will stream down the Atlantic City Expressway. They’re fun to watch, too.

While walking into the Trump Taj Mahal, a disheveled man carrying a solo cup half-filled with beer walked up to me and said, “Hey, boss, you got 50¢?” 50¢! What can you do with 50¢? I gave it to him. There’ll be no redemption for him. That town is a repository of lost souls. I tend to spend too much time feeling sorry for myself. My career isn’t where I’d hoped it would be. I can’t take The Daughters on grand, life-altering, perspective-granting vacations. I’m getting older. But one brief stroll down the boardwalk and everything snaps into focus. I’m doing okay.

This dude bought into a crap game with $2,400. In my income bracket, that’s a significant amount of money.

Rows of $100’s. The box man swipes them with a counterfeit marker. 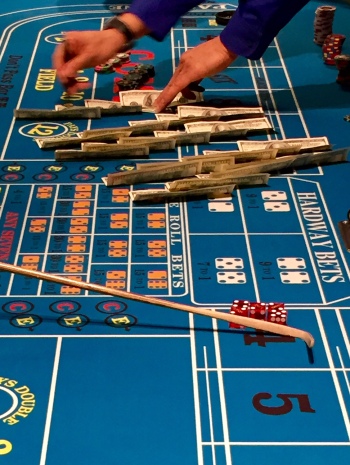 In just :25 minutes he’d whittled it down to about $200. He lost it all on aggressive, stupid bets. He was very angry. He kept announcing to no one and to everyone that he’d won a lot of money the night before. They always do that. When it was his turn to throw the dice, he’d chuck them so hard that they’d bounce out of the table and land across the aisle near the blackjack tables. He was in self-destruct mode but the pit boss, box men and stick man did nothing to stop him. I see it all the time.

This is the Revel Casino. It’s an “invisible” building. Its skin reflects the sky. Under ideal conditions, the building fades into the background. It’s a neat architectural trick. This is an un-retouched iPhone photo. 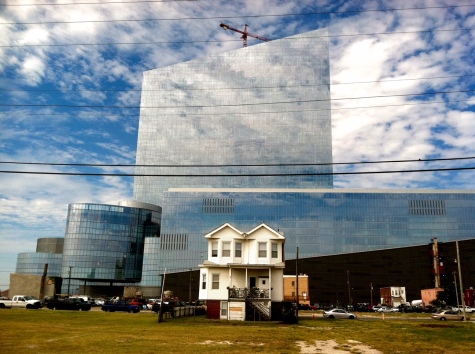 The owner of the house in the foreground refused to sell. Its 80-year old resident moved there when he was just 5. The Revel is one of the casinos that went belly-up, so I guess he gets the last laugh.

Last week, a gas explosion destroyed three buildings on 2nd Avenue and 7th Street in the East Village. Two people died. It’s an area that I spent an awful lot of time in, so I was saddened. I paid countless visits to the Pommes Frites shop on the way home for a late-night order of Belgian Fries. Now it’s gone.

The site of the destruction became a tourist attraction. Thoughtless shitheads posted smiling selfies on Instagram while, in the background, rescue crews frantically searched for bodies. Locals put up signs asking people to please be respectful. The stoops that afforded the best camera angles were blocked by residents.

What a bunch of narcissists we’ve become. I hate the word ‘selfie.’ It’s infantile. This morning, I read a story about two high school students in Jakarta who plunged to their death over a waterfall while taking selfies. They stepped back for a better angle and went right over the edge. I think that’s called ‘thinning the herd.’

I saw The Audience with Helen Mirren as QE2. It’s by Peter Morgan, the same guy who was responsible for The Queen. Those two have their Royal groove on. It was catnip for an aging Anglophile like myself. Not a bad likeness, eh? That’s Mirren on the right.

It imagines what occurred during the weekly one-on-one smackdowns between Queen Elizabeth II and the 12 Prime Ministers who served under her. (Some of the PMs were played by American actors. I wondered if that was an Actor’s Equity insistence in order to transfer it across the pond?) It also imagined the Queen confronting herself as a little girl. A compelling, seamlessly executed plot device.

The meetings weren’t presented in chronological order. The show time-jumped backward and forward. Lightning-fast costume and wig changes performed on stage while surrounded by Ladies in Waiting allowed Mirren to shed years and put them back on again at will. Saying she’s a great stage actor is like accusing water of being wet.

99 thoughts on “Table scraps is all you get”