One of our senior executives was complaining that they didn’t serve single malt premium scotch in business class on his flight back from LA. Just Dewar’s. How do you get to be so successful and so powerful and still be such a big baby?

Is it legitimate for him to expect better after the exorbitant cost of the seat, long hours spent away from his family and crushing pressure that’s inherent in his position? I have my judgment. How do you rule?

Young, hot, fake blonde ESPN reporter Britt McHenry was picking her car up from an impound lot and got caught on a security camera berating a towing company employee. She was mad that her car had been towed and decided to take it out on the woman behind the counter.

“[You have] no education and no skill set. Just wanted to clarify that.”

“Do you feel good about your job? So I could be a college dropout and do the same thing? Why, because I have a brain and you don’t?”

“I’m on television and you’re in a fucking trailer, honey.”

I watched the tape over and over and was driven into a mad, blind fury. The depth of my rage was disproportionate to the offense committed. This cut me to the bone. Classism is my Achilles heel. The fact that I never went to college is a 50-pound stone that’s been strapped to my back my whole life. I’ve done the best I could with the hand I was dealt but the world is full of Britt McHenrys and senior asset management executives to remind me of my place.

In her tweeted apology, she said it was “…an intense and stressful moment…” Can you imagine your life being so breezy and care-free that retrieving your car from the impound lot qualifies as intense and stressful? I’ve got very un-Christian like feelings for Ms. McHenry coursing through my veins. I fear I’ll enjoy anything bad that happens to her. I don’t want to be that guy. Consumed with schadenfreude. Hoping to see the worst happen to someone. That would make me no better than her. But it’s hard to take the high road.

There’s a smart installation at the Tanya Bonakdar Gallery on 21st Street in Chelsea. Artist Tomás Saraceno’s Hybrid Solitary… Semi-Social Quintet… On Cosmic Webs… is on view through May 2nd. His medium is…spider webs.

Each piece in the exhibit was created by spiders spinning webs.

Cubes are constructed from carbon fiber sticks. A spider is introduced into the cube and she begins to spin a web.

During their creation, the cubes are turned onto their various sides so that gravity becomes an element in the construction. Saraceno likens this to an hourglass being flipped. The title of each piece describes its creators and time of construction. This is:

The spiders are nurtured and fed. A jar of fruit flies is dumped into the web. Since there’s a food source, the spiders don’t stray.

The pieces range in size and web complexity.

Once Saraceno feels the piece is complete, the spiders are liberated, the webs are treated for preservation and the cubes are sealed off with panes of glass. 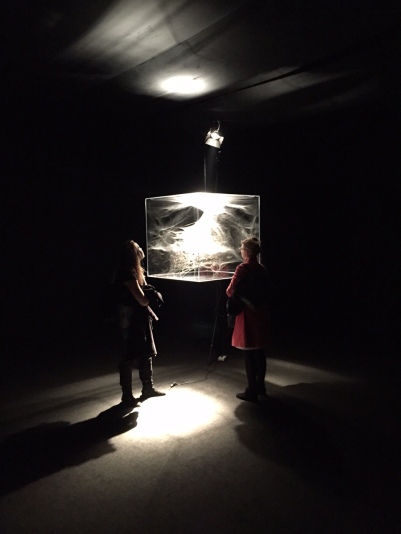 You enter the darkened gallery by parting thick, black curtains. It’s startling to walk in from the midday sun. You’re temporarily disoriented.