A meandering group of morsels whereby I judge myself and others.

Actually, I’m betting that’s not her first. Do you know how you’re not supposed to think your better than anyone? Or talk bad about how other people raise their kids? Sometimes it’s hard not to do that.

“Don’t hate all rich people. They’re not ALL awful. Believe me, I know some evil poor people, too. We need SOME rich people: Who else is going to back our movies or buy our art?”

Thanks, Mr. Waters. I needed to hear that. I’m so consumed with envy and self-loathing that I’ve developed a nasty predisposition for disliking someone simply because they have a lot of money. The first step is acknowledging the problem. Then you can attack it, reet?

I saw my pretend girlfriend Mary-Louise Parker in Heisenberg. It’s a fantastic male fantasy about a scrumptious, troubled, young woman who finds comfort and salvation in the arms of a much, much, MUCH older man. It’s enough to fill you with false hope.

I’ve seen my Mary-Louise in a few plays and she really knows how to work a stage. She knows how to play crazy and emotional, too. Real tears when required. It’s in a small, black box theater where the actors perform just steps away from you. It can heighten the drama, but it can also be disconcerting. They get into your personal space. Thankfully, I controlled my almost overwhelming desire to stand up and introduce myself to my Mary-Louise and try to charm her.

Here’s my favorite news story of the day. 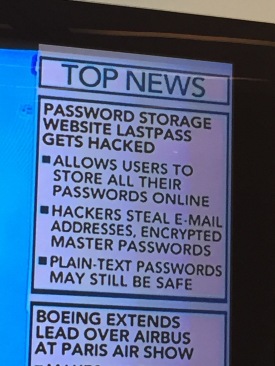 When I first heard about LastPass, I wondered about the wisdom of keeping all your passwords in one central location on the cloud. The Black Hats will always be a step ahead of the White Hats. Sorry.

Currently at the Schoenfeld is Helen Mirren as Queen Elizabeth II in The Audience. It imagines a series of meetings between the Queen and her various Prime Ministers over the years. Mirren won a Best Actress Tony and deserved it. Opening this fall, right across the street at the Music Box, is King Charles III. 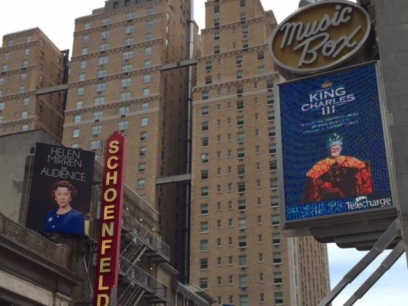 It’s transferring from London. It’s a fantasy in which QE2 dies and Charles becomes king. Once enthroned, he becomes a paranoid monarch and dissolves Parliament. He rings Buckingham Palace with tanks. A palace coup is orchestrated by Catherine, Duchess of Cambridge. I. can’t. WAIT. The play is written in iambic pentameter. I hope to figure out what that is in time for its October opening.

Between these two plays and Wolf Hall, the five-hour drama about Henry VIII, you’d think my Anglophilia would be placated. Well, it’s not. I’d get a cab to JFK and hop on the next London-bound flight if I could.

“My point is, fear of failure forces you to push yourself.”

Fear of failure can also send you under a rock for a few years. Take my word for it.

Here’s the new consultant we just hired. He sits about four feet away from me. He likes to rest his gigantic belly on his desk while he eats (which is constantly). He’s like a baby gorilla who requires a feeding every :60 to :90 minutes. That bottom shirt button is begging for mercy. 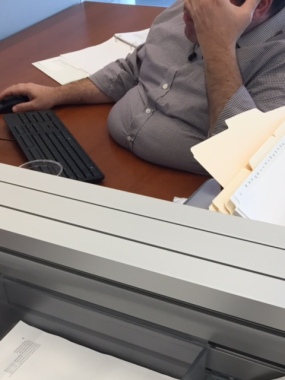 Please spare me any lectures about fat-shaming or how I should be more sympathetic. That son-of-a-bitch is making my workday a living hell. All day long I hear a symphony of chewing, burping, lip-smacking, slurping and crunching. The air is permeated with a noxious stench. Every morning he eats an omelet that smells like dirty underwear. Who can eat an omelet every day?  Its foul essence lingers in my sinuses until noon, when the next odor offensive is launched. He seems blissfully unaware that he works in an open-architecture environment and that his behavior effects everyone. Or, he’s aware and doesn’t give a damn.

Isn’t that nice? It’s summer sports camp season here in the quiet, safe, lily-white, middle class suburbs, and violence is the metaphor. Proud papas send their little boys off to learn the meaning of WAR or to DO DAMAGE (presumably to other little boys). Do you know who shows up to these games? The same guys who scream at the coaches until the veins in their necks burst.

It’s a damn good thing I didn’t have sons. I am ill-equipped to raise a boy. I don’t hunt or fish or camp. Can’t fix a car. Never played a sport. And I believe teaching this kind of aggression to a little kid is immoral. But I don’t dare voice that opinion to anyone. Christ. What am I doing out here, anyway? I’m a complete misfit.