I was enjoying my morning coffee in Bryant Park. It’s the best part of my day. I sit and read a book or the newspaper. Sometimes, I stare off into space or watch the leaves flashing in the sun. I watch the city awake from its slumber. It slowly, quietly, unfolds itself like a beautiful flower. After that, it’s one unpleasant episode after another until 5:00. It’s my daily dose of Zen.

The other morning, unbeknownst to me, I sat near an outlet. A thoughtless prig decided he needed to charge his cell phone. Instead of sitting quietly in my meditative bliss, I was treated to this:

No ‘excuse me, do you mind if I sit here?’ Not a word. I was treated to his theories on the merits of feeding his cat dry food vs. wet food. I wanted to pick up my chair and bash him over his head with it but the thought of explaining why I was in jail to my daughters (not to mention my mother-in-law) stayed my hand. I seethed with a mad hatred that was disproportionate to the offense. Zen Archer fail.

I walked to my office, sat at my desk and soon thereafter, the baby gorilla with the insatiable appetite who torments me arrived with this: 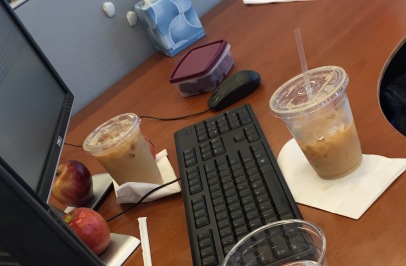 Why have just one iced coffee when you can have as many as you’re able to pour down your gullet in an 8-hour day? They’re free. He makes two at a time because he doesn’t want to have to get out of his chair and walk to the kitchen when he finishes the first one. The morning feeding consisted of:

My Bride and Daughters saw Taylor Swift at Giants Stadium. I paid $460 for three tickets plus $91 for two Taylor Nation gift bags that contained TS logo t-shirts and tchotchkes. That “S” in the logo should be “$”. That’s an extraordinary sum of money for me to spend. I’m just regular. I was steamed because you’d think that for $460, you’d be sitting in decent seats. The decent seats are $460 EACH. Why, Taylor? Why? Most of the men’s lavatories were converted to women’s restrooms. [Clever.]

Then I got the concert report from My Bride.

The stadium was packed with every 10-17 year-old girl in New Jersey. Girls in that demographic are constantly bombarded with negative body-type images that stick for life. That stage is hard enough to navigate without social media and the entertainment industry pointing out all your faults and inadequacies.

My Bride said that Ms. Swift made all those young girls feel better about themselves. It was an old fashioned tent revival for their souls. The songs were affirmations of girl empowerment. Her message is: Don’t take crap from anyone–ESPECIALLY men. At one point, she spoke to each young girl, telling them to [I’m paraphrasing] go home tonight, look in the mirror and say, “I’m beautiful,” because THAT’S WHAT YOU ARE. 60,000 smiling, laughing faces.

Low self-esteem and self-loathing didn’t stand a chance. Shake it off, indeed. I love Taylor Swift.

Everyone who entered the stadium was given a rubber wrist band that had an LED light inside. Kids played with them but when the concert started they took on a life of their own. They obeyed the music.

[Caveat: My Bride is a Cracker Jack wife and mother, but her photography and videography skills need improvement. Hang in there for all :27 seconds.]

This went on all night. Complicated sequences mirrored the beats. At one point, every bracelet glowed the same shade of red. The stadium was a sea of bright roses. If I’d know about this I would’ve gone. [And snuck off to smoke a big fatty.]

There you have it, bitches. The best and worst of humanity, all within 48 hours.

108 thoughts on “First the knife, then sweet perfume”