Everyone’s a little bit racist –
All right!
Bigotry has never been
Exclusively white

I’m a quasi-lefty from way back. Growing up economically challenged and spending two decades in the racial bouillabaisse of New York City inoculated me from the ravages of economic, racial or cultural insensitivity.

Or, so I thought.

Here’s a synopsis of “Smart People,” the new drama by Lydia Diamond about to open off-Broadway at the Second Stage Theater. I hope you’re sitting down.

“Four Harvard intellectuals, a medical intern angered at being underestimated by his white colleagues; a white Harvard professor whose neurological studies, he says, show that white people have a “predisposition to hate” people of other races; an African-American actress frustrated at her lack of opportunities…”

Stop right there. I’m a big supporter of the arts, especially theater (+/- 50 plays annually), but I’m not wasting a dime or my time on a play that puts forth the notion that white people are naturally predisposed to racial hatred. Additionally, all the conflicts are caused by white people. It’s a flat, one dimensional, ugly piece of bigotry. A shit premise and I reject it.

The playwright is a black female. Imagine if a white male wrote a play that concluded black men abandon their families because it’s coded in their DNA. I wouldn’t support crap like that, either. (Which is irrelevant because it’d never be produced.) This playwright isn’t some fringe crackpot. She has bona fides. She had a play produced on Broadway (which I saw and enjoyed) and the Second Stage is a major off-Broadway house.

You can argue that she’s trying to stimulate a dialogue on race but I don’t buy it. There’s nothing high-minded going on here. Setting the story in Harvard is just putting lipstick on a pig. She’s going for low-hanging fruit. Clearly, we need to have a discussion about race but I’m confident this isn’t the way to go about it. Wait until Fox News gets hold of this.

This story thread hardened my heart and blinded me to the legitimate grievances of the other characters. I couldn’t care less what their struggles were. I find this idea so odious that I give no weight to anything else she’s written.

Right on the heels of reading this, I heard Spike Lee announce that he’s boycotting the Oscars because he found the nominations too Caucasian for his liking. Jada Pinkett Smith quickly followed suit. Why would anyone care if those two clowns didn’t attend the Oscars? So stay home. I’ll take your seats. Jada named her son Jaden. Her husband Will named their daughter Willow. What a couple of narcissists. Those kids are condemned to spending the rest of their lives in a shadow.

See that? Just typing this out got me all riled up again. I’m a speeding locomotive without any brakes.

This is Jamie Dimon. He’s the CEO of firm that manages $1.7 trillion (not a typo) in assets. He came down off Wealth Mountain to share this piece of sage wisdom with the commoners at the recent World Economic Forum in Davos, Switzerland: 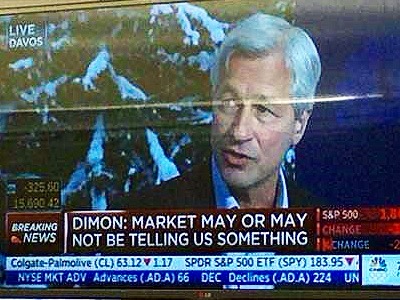 How is that breaking news? Breaking News: It May or May Not Rain Tomorrow. Talk about hedging your bets. This man’s salary was just raised 35% to $27 million annually. You’d think he’d have something with a little more gravitas to impart.

Goldman Sachs just paid a $5 billion dollar fine for bundling subprime mortgages that they knew were worthless and selling them to their clients as viable investments. They knew their clients were going to lose their money but they didn’t give a damn. No one was held accountable. If someone perpetuated a fraud on that scale outside of the asset management industry, there’d be some prison time involved.

The Asset Management industry is peopled by amoral, thieving, windbags. If my daughters go into investment banking, I’ll consider myself a failure as a parent.

Oh, it snowed, alright. 21 inches worth. I never shoveled so much snow in such a short period of time. I was a ball of hurt. 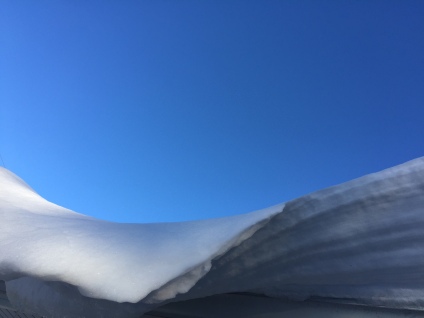 78 thoughts on “Everyone’s a little bit racist. Including me.”