Karen called to torment me. She moved out of her parent’s house and broke off her engagement. She asked for restaurant recommendations because she’s coming to New York with some guy. [She lived in Philadelphia.] She told me they’re staying at the Omni Berkshire. I have no idea why she included that tidbit. She said she’s been thinking about me and wants to get together. Afterwards, she went outside to burn up ants with sunlight and a magnifying glass and pour table salt on garden slugs, that whore. I think I love her.

Landis called me into his office. He told me to call the animal hospital where his dog is and ask for the nearest pharmacy. Then I’m supposed to call the pharmacy and see if they stock the medication his dog needs. If they do, I’m instructed to arrange to have it delivered to the hospital. If the pharmacy doesn’t stock it, I’m to call all the area pharmacies until I find one that does and arrange delivery. And what does any of this have to do with graphic design? As if I needed another reason to hate dogs more than I do already.

I went back to my desk and stewed in my loserdom for about :20 minutes. Then I walked back into his office fully expecting to be fired and told him I’d prefer to keep what little scrap of dignity I have left and not be an errand boy for his FUCKING DOG. I didn’t say fucking dog. I just said dog. He said, “Oh. Okay.” And that was the end of it.

Gerri said she can’t wait to get married because she’s sick of being lonely. She said there are no men in her life and it’s driving her crazy. All of our nights out and the numerous dinners I’ve cooked mean nothing to her. All she needs to do is look across the table. I’m going after Karen. She might sleep with me. Gerri never will. Valerie said to be patient. She said that in time, everything will be revealed to me through divine provenance. She’s very religious.

Well, I’ve been down so Goddamn long
That it looks like up to me

Last month, I submitted a sample for a writing workshop and when I read the acceptance letter I got all choked up. My assumption was that there were so few entries that everyone was accepted or that mine was accepted in error. The class is only 12 people.

On the first day I asked Glenda, the woman running the show, if my piece was selected by default or if there were actually more than 12 people who applied. She said there’s a waiting list of people hoping for cancellations and many more who were never considered. She said the fact that I think so little of my abilities is an important first step in becoming a published writer. Very funny. She asked if I intended to stay in class this time. I didn’t think she’d remember. I’m going to have to grind it out. Nine weeks. Ugh. I read an article about the woman who wrote Thelma and Louise. She didn’t know anything about the mechanics of writing a screenplay so she bought a “how to” book and banged the whole thing out in only six months. Six months!

When visiting PetSmart to load-up on supplies, 9-year old daughter always selects a new chew toy. Recently, she came home with this:

Seriously? I’ll bet the boys back in the molding plant are having a jolly chuckle. Living in a house full of women isn’t emasculating enough. I have to look up from my reading chair and watch this:

Something Borrowed (from Charles Boukowski)

as
the
spirit
wanes
the
form
appears

In other words, as you lose the desire to create, the mundane takes over. I’ve trashed a half dozen blog posts that just sat there like dead lumps of nothing. Bored by the sound of my own voice.

This is Left Bank Books on 8th Avenue in Greenwich Village. Rare, second-hand and out-of-print books. Heaven on earth. 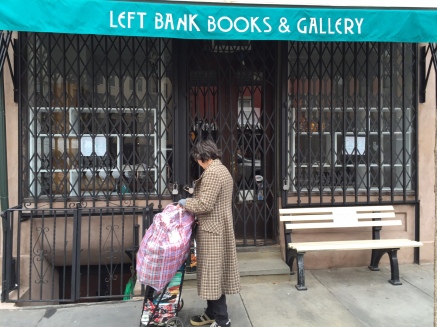 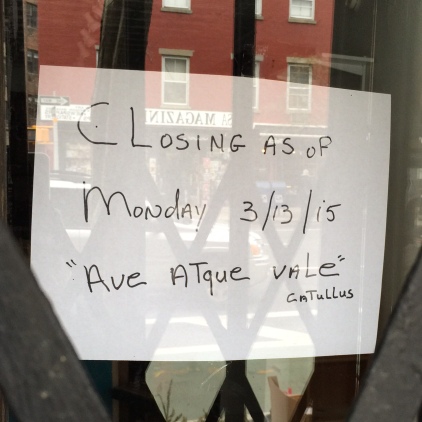 Once again, Jeff Bezos has blood on his hands. The Catullus quote means “Hail and Farewell.” This gave me the deep blue blues for days.