Woke up on Sunday and there was a downpour, which I love. I was ready to enjoy a Brooklyn shut-in day with the cats, a pot of coffee and the Sunday Times when the phone rang. It was Kat. I’d forgotten that I promised to meet her for brunch. It’s her birthday. I swallowed my sour mood and got on the subway to the Upper East Side.

I paid $25 for two dozen half-dead carnations. The guy who sold them to me was an ass. Kat’s girlfriend was there so it was the three of us. Her girlfriend is a gym teacher. You wonder where these stereotypes come from. I am completely at ease around lesbians. I don’t feel threatened the way I do when I’m around a girl I want to sleep with. When you’re with a lesbian, the pressure is off. We can just enjoy each other’s company.

Kat has a big apartment but it’s right on 2nd Avenue by the Queensboro Bridge. It’s only three flights up so you get a fairly constant concert of traffic horns, bus fumes, sirens, yelling and other urban horrors.

Kat asked me if I wanted to be a sperm donor. She and her girlfriend want a child. She said I’d be free from any financial responsibilities or obligations. They can certainly afford to raise a kid. It’s very flattering but I said no. What about that poor kid? Isn’t he/she going to want to know who his/her father is? What do I say when that day comes? “Oh, your mothers said I didn’t have to have anything to do with you and I was okay with that.” That’s not right! I’d feel ashamed. Actually, the more I think about it, the more I don’t like the idea. They should look past their own selfish needs and see how these other lives would be affected.

I had planned to go back to Brooklyn after brunch but Kat insisted—INSISTED—I join them for the matinee of Man of La Mancha on Broadway. I felt kind of bullied but she bought my ticket and I ended up having a nice time despite my bad self. They already had tix so I sat alone, which was fine.

Raul Julia was Don Quixote. He’s such a good actor. And a hell of a voice, too. Sheena Easton was Aldonza. She’s so beautiful and so my type that I didn’t notice whether or not she could sing or act.

In one dance, Aldonza is beaten and raped by several men. Her hands are tied together and one guy gives her the business end of a whip. The choreography included a lot of gyrating and thrusting hips that inferred penetration. It was pretty graphic stuff, especially for Broadway. It was uncomfortable to sit through. I’m still haunted by it. There were a lot of little kids in the audience. Their parents must’ve been mortified. I don’t know how my poor Sheena does it eight time a week.

Rapper Sister Souljah said that black people should take a week off from shooting each other and only shoot white people. Isn’t that pleasant? Presidential hopeful Bill Clinton went on TV and called her a racist. There’s a huge outcry in the black community. They’re saying Clinton attacked her. Jesse Jackson called it a cheap shot. Vice President and professional idiot, Dan Quayle, was making an appearance at an elementary school. After a student wrote “potato” on a chalkboard, he walked up and added and “e” at the end, thinking it was a spelling error. What an imbecile. That guy is only one heartbeat away from the presidency. What an unexpectedly entertaining presidential campaign this is turning into.

I was alone tonight and happy for it. I went to Café Mogador on St. Mark’s Place. I had a bowl of split pea soup and a cappuccino. I watched the pretty girls come and go. I’m invisible to them.

These wifi kiosks have popped up all over Manhattan. In addition to a wifi signal, they provide a touchscreen with full, free, internet access. it’s paid for by city tax dollars and advertisers. 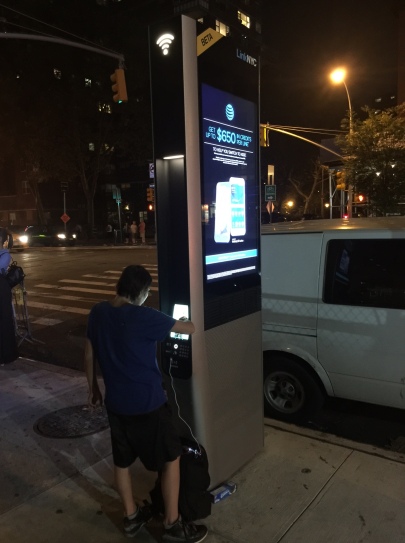 Fights have broken out. NYC is pretty cleaned-up as compared to when these journal entries were written, but it’s still got it’s share of grifters who game the system. In a twisted way, I find it admirable.