Would you look at this? Exactly 25 years ago to the day. Almost. Where were you?

Had lunch with Kat at The Brasserie. It’s as close as I’ll ever get to the Four Seasons. I had a club sandwich. She had a spinach salad. $43. I picked up the tab. I have to once in a while. It’s emasculating to never pay.

I don’t think she’s happy with her girlfriend, although she claims she loves her very much. She doesn’t think she likes having sex with women and all she ever wears is sweats. They’d better get that shit sorted out before they do any more house hunting. She told me about a house in Lido Beach they’re interested in. She said it’s an up/down and the bottom half can be rented out. In describing the bottom unit, she kept saying you have your own entrance and you walk out the door onto the beach and you have your own private terrace. You, you, you. I don’t think I was imagining it. I’d have to give it some thought. Commuting from Long Island has never been a dream of mine although wearing sweats 24/7 is.

I visited Elvin last night. It’s the first time I’ve seen him since his mother passed. He doesn’t seem to be taking it well. He’s lost a lot of weight and didn’t have much to start with. I mentioned how sorry I was for his loss but he clearly didn’t want to discuss it so I dropped it.

He had a friend over I’d never met. Tim. I think I’m the only straight person Elvin knows personally. That goes for ALL of my gay friends. It seems gay people ONLY hang out with other gay people. I think I’m a token. One of Oscar’s friends called me a breeder. Nice.

We sat in the living room and chatted like a bunch of mature adults. Elvin lit a fire. One day, I would like an old Brooklyn brownstone with an old Brooklyn fireplace that still works. There’s a photo of Victor on the mantle just before he passed away and he looked really, really bad. Elvin and Tim listed all the people in the neighborhood and friends of friends who are sick with AIDS. It was a long list. I was thinking to myself how lucky I am to be straight. Not that I’m immune, but I like my odds. For dinner he made chicken marinated in teriyaki sauce. It was very good. I left a little heavy-hearted because of all the talk about death.

Oscar threw a party for a friend who was just accepted into law school. I’ll tell you what…my gay friends sure know how to host a shindig. Loud, thumping music, dancing, scrumptious food and lots of laughing.

The next day I was watching the Cowboys/Lions playoff game and the two guys below me were having loud sex. It’s annoying. I cranked up the TV so I couldn’t hear them. Listening to gay sex while watching the NFL left me discombobulated. I don’t understand gay sex. There’s no part of a man that I find even remotely enticing. Poor women.

When I lived in Arizona my apartment shared a thin wall with newlyweds. That’s was pretty great. They went at it day and night. The girl was a screamer. I remember once, between moans, she said, “You shouldn’t. Remember what the doctors said.” That didn’t stop him. Can you imagine if he’d dropped dead right in the middle of it? I’m certain that it happens all the time.

Lucy and I saw a play at the Walter Kerr. Crazy He Calls Me. About a Brooklyn mama’s boy who falls in love with a Polish immigrant. It was just awful. Lucy didn’t like it either. It’s a two-hander and I felt bad for the actors. Polly Draper from thritysomething is in it. Lots of Hollywood folks come out here slumming on Broadway to burnish their resumes. She should run right back to LA.

I would display this in my grand foyer if I had one. 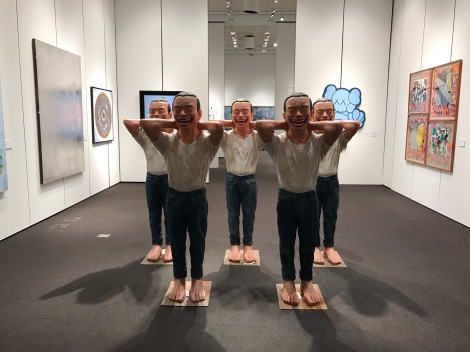 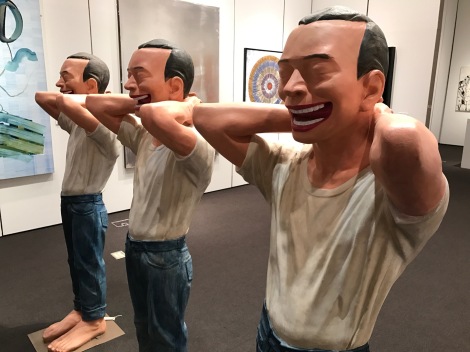 Manhattan sunrise. I caught this just before they extinguished the lights on the Chrysler Building. It’s my favorite skyscraper.

64 thoughts on “This was AIDS”