Six years ago I published a book for Nick Hornby and Bruce Springsteen. There were 200 softcovers signed by Hornby and 26 hardcovers signed by both. I set the published price for the softcovers at $60 and the hardcovers at $225. A hardcover was sold yesterday at a literature auction in San Francisco. It’s the first time one has been offered on the open market since publication. It sold for $2,700.

In granting permission to reprint the copyrighted material, it was stipulated that all proceeds, labor and material had to be donated to charity. I ended up writing a check for close to $18,000 to Ambitious about Autism, a school for autistic children in London. The materials cost about another grand. The labor is incalculable.

This sale has opened a debate. My wife, mother-in-law and a few others feel the seller should send a donation to the charity. I think that’s baloney. The implication is that every time one of these books changes hands, a donation should be made. A contribution would be nice but I see the charitable donation as a one-time event. I feel no weight of obligation. Would you?

Here’s a post about the book. Scroll to the bottom for nice pics.

Late commute back to New Jersey. 20-something-or-other shrew sitting next to me yammering to her boyfriend non-stop for forty minutes, spoiling my commuting bliss. Talking about nothing. She never took a breath or gave him a turn to speak. Who is this poor soul on the other end?

Guys: If your woman calls you Foofy Bear, run. Run as far and as fast as your feet and wallet will take you.

A new Broadway production of The Glass Menagerie was on my A-list for the spring season. It has an excellent pedigree. Sally Field plays Amanda Wingfield, the doppelgänger for Tennessee Williams’ demented mother. Directed by Sam Gold, another seasoned pro. I started to hear grumblings and disparaging remarks. I asked a pal the day after he saw it if it was worth my time + money. Here’s his unedited feedback for your amusement.

Glass Menagerie was every bit as awful as everyone says it is. Dreadful. Emotionally void. Modern dress. Virtually no set, except a kitchen table and a modern day phone. No Southern accents. And Laura is played by a disabled actress in a wheelchair whose face is somewhat paralyzed. Makes no sense in terms of the character and watching her get into and out of the chair is horrifying. She gets down on all fours and kind of backs in (with help). I was mortified.

Totally opposite of the beautiful play Williams wrote. Sam Gold, the director, who’s usually wonderful, should be embarrassed. However, the audience liked it and I bet the critics will gush. They wouldn’t dare criticize a disabled actor. Or such a minimal production.

The Gentleman Caller is excellent — what you can see of him, because his big scene with Laura is lit only by candles in a candelabra. And I liked Joe Mantello’s opening and closing monologues.

RT is 2:05 with NO intermission. For no discernible reason.

It’s, quite possibly, one of the worst things I’ve ever seen. I suggest you go, just to see how a classic play can be pulverized into meaningless trash.

Guggenheim snowfall outside; Calder inside. 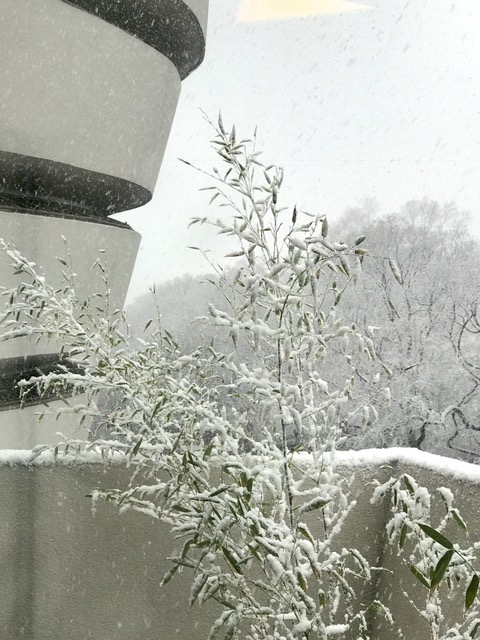