I saw Mary-Louise Parker (my pretend girlfriend) in the Broadway production of Ibsen’s Hedda Gabler. 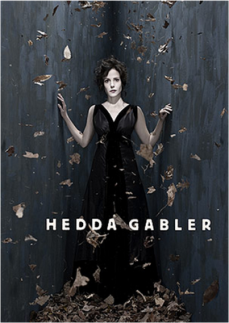 When it opened a few months ago, the critics were almost unanimous in their disdain so I expected very little. Out loud, everyone says that they don’t listen to the critics—especially New York theater critics. You won’t find a bigger bunch of malcontent failed writers and actors looking to tear down what they themselves could not build. But the truth is that EVERYONE listens to the critics.

I’ll admit that there were a few passages that were…ahhh…what’s the word I’m looking for? Oh, yea. Boring. A few scenes plodded along at too leisurely a pace. But I am pleased to report that, overall, I enjoyed it. Pretend Girlfriend (gawd, she’s cute) was in very fine form in the title role as a bored, depressed newlywed who becomes so despondent over her inability to control the lives of the people around her that she shoots herself in the head at the end of the play. Talk about your desperate housewife!
That fucking Ibsen is a real barrel of laughs, isn’t he? The last time I saw an Ibsen play, Master Builder, I ended up walking out at the intermission—something I had not done in over a decade. I think I’m through with Ibsen. I’ll stick with the Bard and leave the depressed Norwegians for the New York theater intelligencia.