This morning’s Asbury Park Press brought the sad news that Memory Lanes, my local bowling alley, burned to the ground. 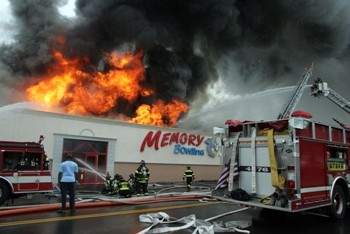 If you’re good at shooting billiards, you’re a shark. Pool halls have a dark, sinister, poetic panache associated with them. Being good at pool can get you laid. Have you seen The Hustler? Or its sequel, The Color of Money? But nobody gives a shit if you’re a good bowler. Least of all, hot girls who wear a lot of black and like to hang out in tough neighborhoods. And I don’t know why that is. To me, they’re two sides of the same coin.

Isn’t that a great name for a bowling alley? Memory Lanes? Bowling is perceived as a low-brow form of entertainment but it’s always been a part of my life. There aren’t many things I did as a child that I occasionally still do today. I use to take 7-Year Old Daughter to Memory Lanes. We had a nice time but now it’s gone.

The second passing came courtesy of The Recording Academy, the association that bestows Grammy Awards. Polka music has been quietly eliminated as a category. It’s considered irrelevant. My father was an empty, useless man but one thing he did right was play polka music when I was growing up.

On Sunday mornings we use to watch the locally produced Polka Varieties on TV. It was like (and I’m not kidding about this) American Bandstand for polka music. The host was Paul Wilcox (Paul Whitesocks) and instead of attractive teens dancing to the latest rock hits, there was a live band, usually Frankie Yankovic, and the dancing audience was comprised of extremely old people.

Laugh if you want, but it takes a great deal of dexterity to dance the polka. Especially for women! They have to perform all those complicated steps backwards. Yankovic was a virtuoso of the button box. The Beer Barrel Polka! Who Stole the Keeshka Polka! And the polka guaranteed to offend at least half your audience, The Too Fat Polka.

I don’t want her.
You can have her.
She’s too fat for me.

Look, obviously, I’m not trying to insinuate that a bowling alley and an antiquated form of music meant as much to me as my recently deceased mother. Don’t be an idiot. But things pass out of your life and you feel a void, even if it’s a small one.

This was the first Saturday that I didn’t have my usual afternoon phone chat with my mom. It was weird. I called her number so I could listen to her recorded greeting but the number had already been disconnected.

6 thoughts on “2 more deaths in the family”