My father-in-law signed 7-Year Old Daughter up for golf lessons on Saturday afternoons. He even bought her a set of real clubs. He’s a golfer and he wanted to indoctrinate her into that world. 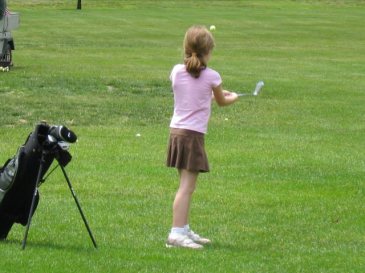 That’s fine with me but, personally, I’ve never held a golf club in my life and have no desire to start now. It looks like a dull game and I have some negative preconceived notions (i.e., stereotypes) about people who like to hang out in country clubs. In my mind’s eye, they’re the same crowd who kept George Bush in office for eight years and drove our economy off a cliff, amongst other offenses.

Father-in-law was otherwise engaged Saturday afternoon so I took 7-Year Old Daughter to her golf lesson. I was her caddy, which I thought was a hysterical joke until she chastised me for giving her the wrong club.

“No, Dad, that’s my short iron. I need the medium iron. See, it says right here on the head.”

There are only five kids in her class. When we got there, she walked up to the only other girl in her class, Isobel, to greet her. Daughter said, “Hi, Isobel. I like your hair like that. And that’s a cute skirt.”

Isobel is about three years older than Daughter and a few inches taller. She looked down on daughter (literally) said nothing, turned her back and walked away. A few minutes later, I watched from a distance as the same scenario played out. Daughter says something to Isobel, Isobel turns her back and walks away without a word.

Isobel was being a bit cunty to my Daughter. I could see the hurt etched onto Daughter’s face after that second snub. I wondered where Isobel learned such deplorable behavior. I looked over at her father. He was a stick of a man with a pot belly and a tight fish face who drove a BMW.

I was considering teaching Isobel a valuable lesson in humility by kicking her father’s teeth down his fucking throat in full view of the class. The episode confirmed everything I’ve always suspected about the thrilling world of golf.